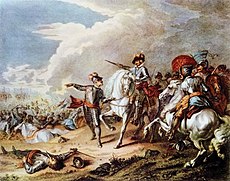 The Battle of Naseby, 1645, a turning point in the English Civil War.

This learning pathway explores Absolutist political systems in Europe, the Middle East and Asia. It examines how Absolutism was justified and consolidated in Europe. It explores the power and spread of the Ottoman Empire, and the rise of the Tokugawa Shogunate. It also considers challenges to Absolutism, and the English Civil War.

During this learning pathway students will watch a video lecture on Absolutism in Europe, complete a number of readings, and examine primary source material justifying Absolutism.