What is a Computer?

A computer is an electronic device that manipulates information or "data." It has the ability to store, retrieve, and process data. You can use a computer to type documents, send email, and surf the Internet. You can also use it to handle spreadsheets, accounting, database management, presentations, games, and more.


Whether you realize it or not, computers play an important role in our lives. When you withdraw cash from an ATM, scan groceries at the store, or use a calculator, you're using a type of computer.

Inside a Computer -- Part of the Computer Motherboard For beginning computer users, the computer aisles at an electronics store can be quite a mystery, not to mention overwhelming. However, computers really aren't that mysterious. All types of computers consist of two basic parts – hardware and software. Hardware is any part of your computer that has a physical structure, such as the computer monitor or keyboard. If you can touch it, it is hardware. Software is any set of instructions that tells the hardware what to do. It is what guides the hardware and tells it how to accomplish each task. Anything you buy for your computer can be classified as either hardware or software. Once you learn more about these items, computers are actually very straightforward.


The first electronic computer, the Electronic Numerical Integrator and Computer (ENIAC), was developed in 1946. It measured 18 feet by 80 feet and weighed 30 tons.


What are the Different Types of Computers?

There are many types of computers, but personal computers such as desktop and laptop computers are probably the two type of computers that you think of first. 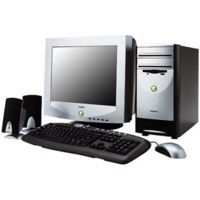 Many people use desktop computers, or desktops as they are often referred to, at work, home, school, or the library. They can be small, medium, or large in style, and usually sit on a desk. The term desktop actually refers to the casing, or the tower. Once you add a monitor, mouse, and a keyboard, you have what is typically known as a desktop computer.

The term desktop computer originated when the computer case was wide and flat, and was designed specifically to fit on your desktop with the monitor on top. 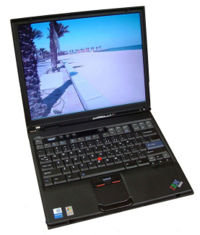 Example Laptop Computer
The second type of computer that you may be familiar with is a laptop computer or laptops as they are often referred to. Laptops are battery or AC-powered personal computers that can be easily carried and used in a variety of locations. A quick glance at the size of a laptop and you might guess that it would be difficult to expand or upgrade. While the desktop computer case is relatively easy to open and access internal components, the small laptop case makes this more difficult in comparison; however, the primary benefit of a laptop computer is its small size and easy portability.


A laptop computer is sometimes called a notebook computer because of its size.