Logo Candidate 1 is an attempt to provide a colourful, yet inclusive, logo to represent all the contributors to WikiEducator. Its features include four different colours representing different aspects of the community, plus the words Wiki and Educator slightly offset to each other. The Logo has both a square version and a rectangular banner version.

While colours represent different things to different cultures, an attempt has been made to incorporate general colours whose connection to different concepts is more universal. This may not quite match perceptions of all people, but as a starting point the colours have been chosen to represent key ideas behind WikiEducator.

Yellow: This represents light (as in light from the sun) which shines forth from WikiEducator (and allows us to be a bit lyrical). Light also represents the a reduction in darkness as in 'coming to know' more ideas than one previously did.

Blue: This represents the sky (although different locales have varying shades of blue). The concept behind the blue corner is that the 'sky is the limit' meaning that together WE (and we) can grow more than when we limit ourselves.

Green: Green symbolises growth as in the trees and grasses and other plants. The concept of growth is inherent in the ideals behind WikiEducator at both community and individual levels.

Red: Red is the more problematic as in some cultures red symbolises passion, in our passion for learning. While it does have other connotations in some cultures, it predominantly symbolises courage and passion (eg red weddings in China but also red for funerals which in other cultures also represents rebirth). Thus red is used to invoke our passion for learning and for our community values.

The font chosen is Matura MT Script Capitals (available from NewFonts.net). This font evokes a feeling of multiple script styles rather than a traditional western block style typeface. The flowing capital W evokes a feeling of some Middle Eastern Style writing styles, while the capital E evokes a more Eastern feel with a form similar to the brush strokes. As an added bonus, the lower case i evokes the feel of a person with extended arms symbolising the welcoming spirit of WikiEducator.

To be linked: Photoshop Elements version for editing. This file will (eventually) be available for editing. It should be editable by GimpShop or The Gimp.

Logo Candidate 2 is an attempt to provide a colourful, yet inclusive, logo to represent all the contributors to WikiEducator. Its features include four different colours representing different aspects of the community, plus the world map mean it is worldwide. 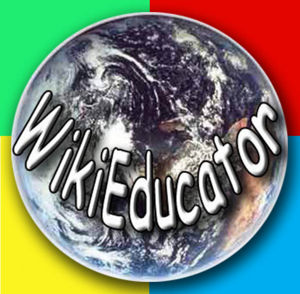