Visit the page on Hess's Law

Some energy changes can be calculated directly from experiment while others cannot.

Some energy changes can only be calculated indirectly using Hess's Law.

Hess' Law states that the heat evolved or absorbed in a chemical process does not depend on the route followed by a reaction but depends only on the initial state of the reactants and the final state of the products. The enthalpy change is the same whether the process takes place in one or in several steps. This is also known as the law of constant heat summation. 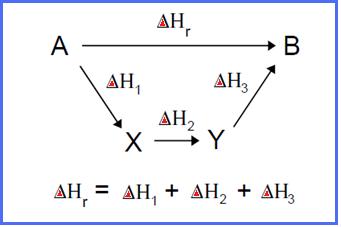