Yelayou Endale Gebremeskel (born 1986), is an Ethiopian born in the beautiful city of Awassa which is around 275km south of the capital Addis Ababa. Yelayou is a web expert in profession and has been a member of the open source community since his early stages of career. He's involved also in mobile application development specially on the Android SDK Platform.

Yelayou was born in Awassa, Ethiopia on Feb 10, 1986. He's the second child for his father Endale Gebremeskel and his mother Fantaye Alemu both missionaries. Later in 1990 he moved to the capital Addis Ababa with his parents and two brothers. 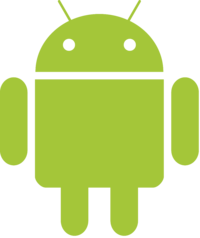 Android robot
After he graduated from Public high school Yekatit 12 commonly known as Menen Yelayou joined a well known private owned college, HiLCoE School of Computer Science and Technology. He enjoyed three years of study in the college fully and perfectly, Thats where he confirmed what he wanted to do professionally. He learned programming beginning from the basic assembly language to the advanced object oriented paradigms, web programming, networking, and also discovered about open source in his college journey and began working on Unix operating systems specially Ubuntu.

Yelayou began his career in 2007 just a few months after finishing his undergraduate studies in Computer Science. He was a freelance website developer before joining the Addis Ababa Chamber of Commerce as an IT Expert on April 2007. After serving a couple of years at the Chamber he moved to GTZ-SLM now GIZ-SLM in February 2009 looking for a better challenge and working environment. Currently he is a System Development Expert in the Knowledge Management Component with colleagues Richard Fulss, Girma Gebrehawariat and Solomon H/Melekot.

Beside his full time job Yelayou is also involved in different Open Source Community works. He's an active member of member GTUG Addis which is Google Technology Users Group which is engaged in promoting different Google technologies and services and Android developments which is a mobile operating system from Google, Though he is not a frequent attendee he also works with young professionals charity group Rotract Club of Keroggie.

Devoted evangelical Yelayou believes life's primary questions can only be answered coherently through Christianity. He has a deep interest in Christian apologetic.