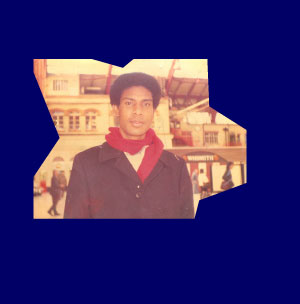 Hello my name is Alfred Vahau. I come from Kivori Kui village in the Bereina District, Central Province, Papua New Guinea. I am the President of the Kivori Peoples Association Inc. which I founded in 2005 with the help of fellow Kivorians to help our people organize themselves to accept the changes as a result of the petroleum activities that are taking place in the area.

One of the challenges that I encountered when I became involved in the struggles of my people was the conflict between scientific and the traditional beliefs concerning the formation of oil and gas. The traditional beliefs about how oil was formed and how it is controlled were fascinating. However in all those beliefs I did not impose my scientific beliefs on the formation of oil and gas, a knowledge I acquired as a trained Geophysicist and a qualified seismologist. Instead my approach was to provide literature on the formation of oil and gas and produced other documents in order to get the people to remain focused in their struggles. I noted the conflicts arising from the traditional beliefs of my people and again hope to document all of this one day.

My greatest achievement in the struggles of my people was to lead the people to form a village association and then have it incorporated. This did not prove easy as there were some oppositions amongst the people. However we persevered and eventually had the association incorporated under the laws of the associations in Papua New Guinea.

The Kivori Peoples Association Inc. was formally launched on Saturday 14th of October 2006. Since then a number of activities have taken place and a corporate plan is currently being developed to guide the association over the next seven years.

At present I am the Director of IT Services for the University of Papua New Guinea. While most of my time is taken up with management issues, I also devote a lot of time to exploring the use of open source technology on the UPNG network. At work I use Ubuntu as the main OS and use Firefox for web browsing and Evolution as the email client. I use the OpenOffice for writing document and presentation.

In 2001 I developed the Breeze program for the School of Natural and Physical Sciences to calculate the Grade Point Averages for the SNPS students. I developed a Perl script running in the Red Hat environment and generated the results as excel spreadsheets. The story of Breeze be read on the O'Reilly website at http://blogs.oreilly.com/digitalmedia/2002/09/perl-success-story-managing-st.html

Besides using Perl at work, I also program in PHP often on the projects relating to dynamic websites and content management systems. I am very passionate about the open source Content Management Systems such as Joomla. Besides Joomla CMS there are others which are all based on the LAMP project because they ran easily on the Linux, Apache, MySql and PHP open source softwares.

I know that to educate the people adequately a resource centre along with good transport infrastructure are needed. A village resource centre is needed to inform the people on contemporary issues on the development that are going on in the Kivori land. A RICS centre would be an ideal project to pursue. This will take time and the political will to make it happen.

As an advocate of open source technology, a lot of resources would be made available at the sites such as http://commons.wikimedia.org and the associated links. So ICT will definitely have an impact on the lives of the people.

Personally for me, from the world of quantum physics to theoretical seismology and onto the ICT paradigm and then onto the Kivori side of life, has been a very adventurous life for me. As the technology increases so are the chances of increasing the level of education for the Kivori community. I have been fortunate indeed to have encountered the various phases of lives.

Besides exploring the different open source technology, I also take time to learn foreign languages with the help of the Internet. These include French and the Cook Islands Maori. The presence of the many traditional imene tukis in the Central Papuan region drew my interest in the private studies of the Rarotongan dialect since the 1990s.