Lament for a dead cow


The poem starts with a description of Wetu the cow. The poet compares the physical features of the cow with the features from her natural environment. Then the poet lists the things that Wetu used to do, but will never do again. Finally, the cause of Wetu’s death, the terrible drought, is given.

Title –A lament is a sad song about the death of a loved one. This poem is about the death of a cow. The fact that it is described as a lament, signifies the fact that the cow was very dear to the family. In African culture wealth is often determined by the livestock one owns. Wetu was the only cow of this family, so this was a very big loss for them.

Line 1 means: We weep, we weep, our cow is dead! (Translation)

Line 2 contains a simile. Wetu's colour is compared to the blue colour of a shadow on the rocks.

Line 3 contains an example of personification. The way the blue shadow looks on the grey rocks is compared to the way a bird nests. It evokes a feeling of closeness or cosiness, as if it is one with nature. It could describe Wetu's fertility.

Line 4 describes the warmth and glow of the hilltop.

Line 5 & 6 compare (another simile) the look of her coat to that of an isipingo berry; black, healthy and shiny.

Line 7 & 8 contains another simile. The shape of her horns is compared to the shape of the new moon and the moon is then personified, describing it as 'tossing' the evening star into the sky.

Line 9 & 10 uses a simile to compare the eyes of the cow to that of a pool of water on the mountain. It refers to the clearness, and dark colour of the water.

Line 11 In this line shadows are personified. The reflection of the shadows and the movement of the water looks like a person diving.

Line 12 Here the flies are personified. They are described as 'teasing'. It indicates that the flies were extremely annoying. 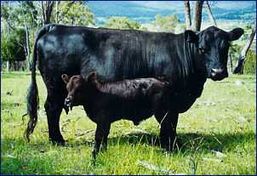 Line 13 contains an example of onomatopoeia. The sound that the tails makes: whistling. It also contains alliteration – the action of and sound made by swatting the flies. With her whistling tail;

Line 14 & 15 describes how the dogs barked at her and how she confronted them with lowered horns, as if to defend herself, but with fear(bewildered).

Line 16 & 18 indicate that not only did the family benefit from the cow, but also nature. Her shadow brought some coolness to the patch of land she was grazing. The sound of her lowing delighted the hills(another example of personification).

The repetition of the s-sound is an example of alliteration. The s-sound is a soft, peaceful sound, emphasising the beauty of the cow and the sound that she made.

Line 19 contains an example of a metaphor. The cow is being compared to a fountain. Fountains usually supply water which is vital for human survival. It once again emphasises the importance of Wetu to her owners. She supplied them with milk (“white rain”) which was of great importance to them.

The alliteration – “fountain – filled” – emphasises the fact that she always gave enough milk to feed everyone.

Line 20 describes how Wetu died. The sun is personified, by being described as 'thirsty'. It drank all the water supplies. The sun “drained” as opposed to Wetu that 'filled' everyone. She became sick due to a lack of water and food. Because of the drought there was no more water or grass.

Line 22 But the clouds vanished and Wetu died as a result of the drought.

Lines 22 – 25 contain short statements, one per line, in contrast with the rest of the poem where the sentences span more than one line. This emphasises the despair the family feels for the death of the cow. The first three lines describe the emptiness, the desertedness and the fact that they don't have any more milk. And the last line describes the feelings of the family, again emphasised by the use of alliteration. And we weep.


For more excercises and information on the poem visit: