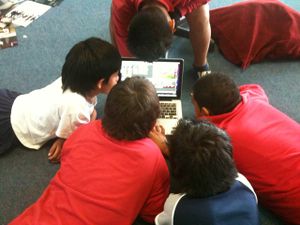 SOLEs (Self Organized Learning Environments) have been built my Sugata Mitra to achieve MIE. These environments enable children to sit in front of large screens with fast broadband. Furniture needs to be arranged so that children can sit in groups. The discussion between children is a crucial ingredient of MIE.

This TED Talk illustrates the remarkable self-learning that can take place in this kind of environment.

While the average classroom cannot achieve the fabulous learning spaces seen in this video, consider spreading your computers around the classroom so that children can learn around computers in small groups (as opposed to having all computers in one area). If you are in a 1:1 setting ensure that children are still organised in groups so that they can discuss and share what they are learning. Mobile devices such as smartphones and capacitive touch screen tablets are great for this because they allow the learners to easily share and view their devices in small learning groups. The pictures below illustrate that this small group self-learning can be achieved easily with both desktop computers and laptops also.

Another great point that came out of this interview was our obsession that learners use the correct vocabulary (preferably in English) otherwise how will we know that they are learning? Mitra points to a wonderful example where the New Deli children used metaphors and made connections from their own lives to explain the 'mouse' and 'hourglass' on our western assembled machines.

They invent their own terminology for what's going on. For example, they call the pointer of the mouse sui, which is Hindi for needle. More interesting is the hourglass that appears when something is happening. Most Indians have never heard of an hourglass. I asked them, "What does that mean?" They said, "It's a damru," which is Hindi for Shiva's drum. [The God] Shiva holds an hourglass - shaped drum in his hand that you can shake from side to side. So they said the sui became a damru when the "thing" [the computer] was doing something. 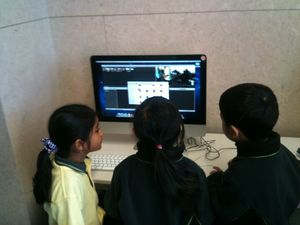 Remoteness was first addressed by Mitra in a geographical sense. For example (in the context of Delhi) he found that the further schools are from the city, the lower the educational outcomes. He then went on to discover that remoteness was not just a developing nation problem but happening in all countries across the globe. Even in developed nations there continues to be areas where there are clusters of 'under-achievement'. When it comes to access to, and knowledge of, digital resources this is often referred to as The Digital Divide.

Like remoteness, the digital divide can lurk anywhere. It is often assumed that the higher the decile, ranking the more access children have to knowledge and digital literacies. However this is an incorrect assumption - there are many cases where children in decile 10 schools can have very limited access to eLearning and, at the same time, many decile 1 schools have exceptional eLearning programmes and opportunities.

It can also be the case that there are digital divides within schools. For example, there are many teachers who bring old devices in from home, encourage students to use their personal eLearning devices (often their smartphones), beg borrow and acquire older computers from wherever they can, and basically do anything they possibly can to increase the computer to student ratio. Yet, in the class next door, there could well be only one classroom computer sitting on the teachers desk while their Tela laptop remains at home and is lucky if it is used once a week for facebook and trademe.

Just as Sugata Mitra has said, the most important factor to increasing learning is very much down to the individual teacher. Too often a student's digital literacy experience is limited by what their teacher can do. How often do we hear "I can't do eLearning unless I get adequate PD first".

Enter Minimally Invasive Education. Today a couple of exceptional junior school teachers and myself pooled all our iMacs together to see if we could encourage our 5 year-olds to gather in SOLES (Self-Organised Learning Environments) and teach themselves how to use iMovie.

Within less than an hour they were creating projects, dragging photos into iMovie, adding sound effects, adding titles, adding transitions, and recording their own voice-overs. They were self-teaching, they were exploring, they were empowered. The topic of their inquiry this term is Beauty and Joy. As an outsider looking in I was overjoyed and it certainly was a beautiful thing!