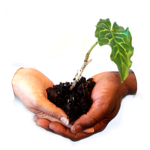 My sandbox From WikiEducator My Sandbox

I am a Guyanese by birth. I was born on the month of March in Georgetown.I now reside at East Coast Demerara.

I am tall and "Slim" and light brown in complexion. I have three children (two boys , one girl) and a grandchild ( a girl). These four people are the joy of my life. They keep me going. Interests:Reading, Shopping,cooking ,travelling and meeting people.

I work with the Ministry of Education NCERD.I have been with this Ministry since 2002. I am attached directly to the Director's Office.

NCERD was established in 1986 to coordinate the functions initially of six Units. Later, the School Libraries Division & Document Centre was established thus expanding the coordinating functions to cover seven Units. The Vision of the institution states NCERD sees a highly professional, accountable, modern and democratic education service that has the capacity to actualize the variety of individual potentials which will form the bedrock of social and economic development of Guyana.

The Mission Statement of the National Centre for Educational Resource Development (NCERD) states as follows:

To plan and implement all in-service teacher education programmes, in order to improve the quality of education at all levels in the system so that education may serve as an effective instrument of social economic development. Specifically, NCERD intends to develop and implement In-Service Teacher Education Programmes that are designed to enhance the capacities of Guyanese schools to become effective, inclusive and successfully learning communities. Deliver quality education through the dissemination of well researched pedagogical findings. Create environment and opportunities that will facilitate, nurture and sustain the empowerment of students and teachers through the development and actualization of individual potentials.

Under the umbrella of NCERD the work of the following are coordinated:

This Unit has as its objectives the following:

Mission Statement The mission of Measurement, Evaluation and Research Unit is to develop evaluation and assessment procedures so as to obtain and provide useful information that would facilitate more effective learning and teaching as well as sound decision-making within the Ministry of Education ansd other related agencies.

This Unit has as its objectives the following:

From WikiEducator Jump to: navigation, search Guyana, officially the Co-operative Republic of Guyana and previously known as British Guiana, is the only country of the Commonwealth of Nations on the mainland of South America. It is bordered to the east by Suriname, to the south and southwest by Brazil and to the west by Venezuela. It is the fourth-smallest country on the mainland of South America (after Suriname, French Guiana, and Uruguay). It is one of the four non-Spanish language territories on the continent, along with the countries of Brazil - Portuguese, Suriname - Dutch and the French Guiana - French. Culturally, Guyana associates primarily with the English-speaking Caribbean countries such as Jamaica, or Trinidad and Tobago.

The first Europeans arrived in Pirate ships in the area around 1510, a theory that supports the current accent on the quasi-English language spoken today. Guyana was inhabited by the Arawak and Carib tribes of Amerindians. Although Christopher Columbus sighted Guyana during his third voyage (in 1498), the Dutch pirates were first to establish colonies: Essequibo (1616), Berbice (1627), and Demerara (1752). The British assumed control in the late 18th century, and the Dutch formally ceded the area in 1814. In 1831 the three separate colonies became a single British colony known as British Guiana.

Escaped slaves formed their own settlements known as Maroon communities. With the abolition of slavery in 1834 many of the former enslaved people began to settle in urban areas. Indentured labourers from modern day Portugal (1834), Germany (first in 1835), Ireland (1836), Scotland (1837), Malta (1839), China and India (beginning in 1838) were imported to work on the sugar plantations.

In 1889 Venezuela claimed the land up to the Essequibo. Ten years later an international tribunal ruled the land belonged to British Guyana.

Guyana achieved independence from the United Kingdom in 1966 and became a republic on 23 February 1970, remaining a member of the Commonwealth. The United States State Department and the United States Central Intelligence Agency (CIA), along with the British government, played a strong role in influencing who would politically control Guyana during this time.[1] They provided secret financial support and political campaign advice to pro-western Guyanese of African descent, especially Forbes Burnham's People's National Congress to the detriment of the Cheddi Jagan-led People's Progressive Party, mostly supported by Guyanese of Indian descent, which had ties with the Soviet Union. In 1978, Guyana received considerable international attention when 918 almost entirely American members of the Jim Jones-led Peoples Temple died in Jonestown, Georgetown and at a Temple attack at a small airstrip which resulted in the murder of five people, including the only Congressman murdered in the line of duty in U.S. history, Leo Ryan. 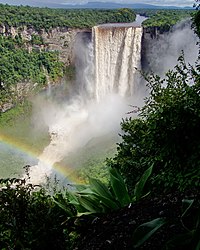 Kaieteur Falls in central GuyanaGuyana can be divided into four natural regions: a narrow and fertile marshy plain along the Atlantic (low coastal plain) coast where most of the population lives, then a white sand belt more inland (hilly sand and clay region), containing most of Guyana's mineral deposits, the dense rainforests (Forested Highland Region) across the middle of the country, the grassy flat savannah in the south and finally the larger interior highlands(interior savannah) consisting mostly of mountains that gradually rise to the Brazilian border. Guyana's main mountains are contained here, including Mount Ayanganna (6,699ft (2,042m)) and on Mount Roraima (9,301ft (2,835m); the highest mountain in Guyana) on the Brazil-Guyana-Venezuela tripoint, part of the Pakaraima range. Roraima and Guyana's tepuis are said to have been the inspiration for Sir Arthur Conan Doyle's 1912 novel The Lost World. There are also many steep escarpments and waterfalls, including the famous Kaieteur Falls. Between the Rupununi River and the border with Brazil lies the Rupununi savannah, south of which lie the Kanuku Mountains. There are many rivers in the country, the three main ones being (west to east) the Essequibo, the Demerara, and the Berbice. There is also the Corentyne along the border with Suriname. At the mouth of the Essequibo are several large islands. The 90-mile (145 km) Shell Beach along the north-west coasts. Guyana is a major breeding area for sea turtles (mainly Leatherbacks) and other wildlife.

The local climate is tropical and generally hot and humid, though moderated by northeast trade winds along the coast. There are two rainy seasons, the first from May to mid-August, the second from mid-November to mid-January. It has one of the largest unspoiled rain forests in South America, some parts of which are almost inaccessible by humans. In 2008, the BBC ran a four-part programme called Lost Land of the Jaguar which highlighted the huge diversity of wildlife, including undiscovered species, and rare species such as the giant otter and harpy eagle.