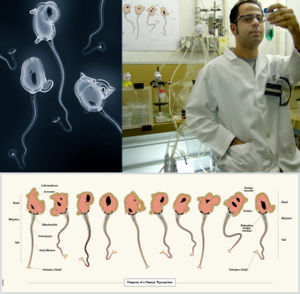 Spermatozoa was 1st discovered by LEUWENHOEK IN 17th century but it was not until 1928 that the sperm countwas found to be associated with fertility potential.Since that time a variety of sperm tests and semen parameters have been developed with the hope of clarifying whether or not a man could impregnate his partner.

The basic semen analysis performed by the "ANDROLOGY LABORATORY" should include the assesment of physical semen characteristics[volume,pH,viscosity,evaluation of sperm concentration,progressive motility & normal morpphology & viability,presence of luekospermia & immature sperm cells,detection of antisperm antibodies and a bacteriological investigation that help to estimate semen quality.

The final compositon is a viscous fluid that comprises the ejaculate.

The following processes are involved in the process of "HUMAN SEMENOLOGY"

The consistency also called viscosity of the liquid sample can be estimated by gentle aspiration into a 5ml pipette and then allowing the semen to drop by gravity and observing the length of thread formed.

a normal sample leaves the needle as small discrete drops,while in cases of abnormal consistency the drop will form a thread of >2cm.

A fixed volume of semen{not more than 10ml} is discovered into a clean glass slide and covered with a 22x22mm coverslip.It is important tht the volume of semen and the dimension of the coverslip are standardised so that the analysis are always carried out in a preparation with fixed depth[20ml]

The microscopic field is scanned systematically and 5the motillity of each sperm encountered is graded a,b,c or d according to whether it shows

Sperm graded (a) display rapid progressive motility along a linear track,covering a distance of at-least 20mm[half the length of a sperm]per second.

The concentration of sperm should be determined using the "HAEMOCYTOMETER METHOD".

In the procedure a 1:20 dilution from each well-developed mixed sample is prepared by diluting 50ml of liquified semen with 950ml diluent.

The later is prepared by adding 50g of "SODIUM CARBONATE"[NaHCo3{it adjusts pH},10ml of 35% (v/v) formaldehyde;helps in differentiating between live and dead sperm]and optionally 0.25g of trypanblue[shows color]or 5ml of saturated aqueus gentian violet to distilled water and making up the solution to a final volume of 1000ml. 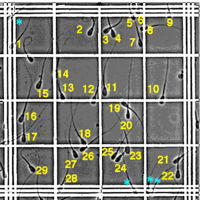 Vital staining of spermatozoa allows quantification of the fraction of living cells independently of their motility.

Live and dead sperm are distinguished by adding 1 drop of semen at room temperature and smearing the mixture on a microscopic slide.

The staining technique makes it possible to differentiate sperm that are immotile but activefrom those that are dead.

"ANALYSIS OF MORPHOLOGICAL CHARACTERISTICS OF SPERM"

The normal head should be oval in shape allowing for the slight shrinkage that fixation and staining induce the length of the head shown be 4.0-5.5mm and the width 2.5-3.5mm.The length to width ratio should be 1.50 to 1.75

There should be well developed acrosomal region comprising 40-70% of the head area.

There must be no neck,middle piece or tail defects and no cytoplasmic droplet more than one-third,the size of a normal head sperm 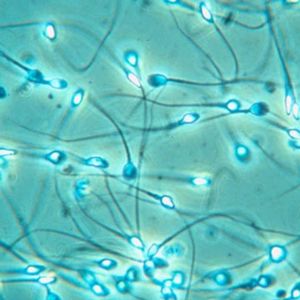 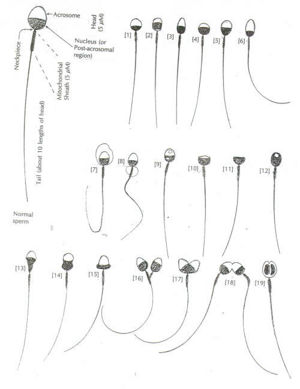