Brief description about myself

{{{I’m Gerard Guedegbe, a Benin stationed journalist working with local newspapers, magazines and online media since the year 2000. I’m titular of a master degree in English studies at the national university of Benin. My journalistic career started in the early 2000 with a daily newspaper after I’ve completed a basic training study in the media department of the French Cultural Center of Cotonou. So for one year, I’ve been engaged in reporting all kind of news until august 2001 when I was recruited as columnist in a bi-weekly newspaper specialised in Education. But, I’ve soon realised that I felt well at ease in reporting business and economic news. I joined in 2003 Economico, the first weekly newspaper specialised in business reporting in Benin. In the meantime, I went through a training workshop in Ghana where I was taught how to report the economic news within the framework of regional integration in West Africa. The skills I got from this training helped to enlarge the scope of my news coverage. Thus, I involved in publishing business news from other countries in the sub region. On the eve of 2005, I landed in a monthly magazine entitled “Marché Libéral” which is also specialised in business reporting. My stay in this newsroom was cut short as the magazine management decided, five months later, to stop the newspaper publication because of financial difficulties. From this time until know, I started a freelance career working with local newspapers and mostly with online journals as an ICT journalist. I'm the current President of Benin Network of Education journalists.}}}

Brief Description about your organization The Benin Network of Education Journalist(RJCE BENIN)is an open group of Benin journalist specialising in Education . it is created in july 04 and its headquarter is in Cotonou Benin 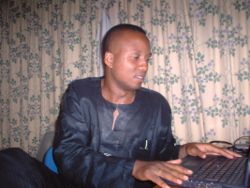 Gerard working on his laptop 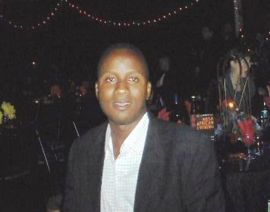