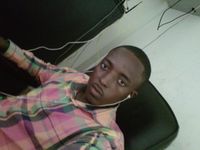 A computer enthusiast,involved in the design and maintenance of computer networks;An analysts with a specialty in Local Area Networks (LANs) or Wide Area Networks (WANs) and computer programming with Microsoft Windows systems support. Am currently at the Center For National Distance learning And Open Schooling(CENDLOS) which is a member of Commonwealth open school association(COMOSA) which is also an intergovernmental organisation created by Commonwealth Heads of Government to encourage the development and sharing of open learning/distance education knowledge, resources and technologies. COL is helping developing nations improve access to quality education and training.

It is a voluntary association of more than 50 independent sovereign states, which provide support to each other, and work together toward international goals. The Commonwealth is described as a "family" of nations, originally linked together in the British Empire, and now building on their common heritage in language, culture and education, which enables them to work together in an atmosphere of greater trust and understanding than generally prevails among nations.

Bringing together some 1.7 billion people of many faiths, races, languages, traditions and levels of economic development, the Commonwealth represents almost one-third of the world's population.

[A java plus VB.net project where information on vehicles can be accessed with a java enabled Mobile Phone anywhere within Ghanaand beyond]

[A Voting system implemented on the dot net platform]