From WikiEducator
(Redirected from User:Sanghamitra/sanghamitra 4)
Jump to: navigation, search

In this unit we examine how market structure influences market outcomes. Imperfect market may assume a variety of forms like monopoly, monopsony, duopsony,oligopoly and bilateral monopoly. In this chapter we study how a market controlled by just one firm –a monopoly. A study of these situation would help us in appreciating the reality around us, particularly the present status of monopoly regulation in the country. Pricing strategy plays an important role in many business decisions.

The essence of monopoly power is the ability to alter the price of a product. In case of perfect competition many firms were producing and selling the same good, each firm has to act as a price taker .Each producer could sell all it wanted at the prevailing price .It would lose all its customers if tried to charge a higher price. Monopolist can alter the price of their output without losing all their customers .Sales volume may reduce when price increases but cannot drop to zero .In other words ,a monopolist faces a downward sloping demand curve.

Fig no-1 illustrates the distinction between perfectly competitive and imperfectly competitive firm .A competitive can sell its entire output at the prevailing market price. Hence each individual firm effectively confronted a horizontal demand curve explain in part A of the fig 1. You also noted earlier that firms under perfect competition do not violate the law of demand .People are not willing to buy unlimited quantities at the prevailing market rate. To induce consumers to buy more of the same product, the market price must be reduced.

Contradiction between the law of demand and the situation of the competitive firm resolved in fig no -1 .There are two relevant demand curves. One on the left hand side of the fig no-1, which appears to contradict law of demand, refers to a single competitive seller in the market. Left hand side of the figure no -1 represent entire industry of which single firm is one very small part .The industry demand curve slope downward from left to right , even though individual competitive firms able to sell their own output at the prevailing market price .

In monopoly market situation the firm is identical to the market demand curve for the product. The difference between firms under perfect competition and monopoly is from demand side only. In case of perfectly competitive firm marginal revenue is equal to price irrespective of level of output and sales. But in monopoly the demand for the product of the firm is constitutes the total market demand of the commodity.

A competitive firm can maximize profits by producing at that rate of output where the marginal cost is equals to the price. The demand curve facing a monopolist is downward sloping .A firm must lower its price to increase the sales of his output. Similarly he can raise the price if he is prepared to sacrifice some sales. In table no 1, firm wants to increase its sales from 1 to 2 units per day and hence reducing price from 50 rupees to 45 rupees .The marginal revenue of the second unit is therefore only 40 rupees. This implies that the if the monopolist wishes to sell more and more units of his commodity ,he must progressively lower down the price. 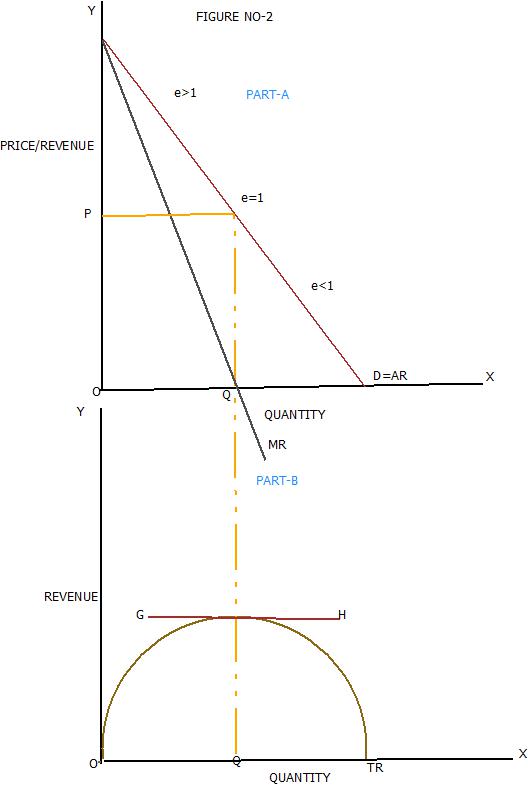 The average and marginal revenue at a quantity are related to each other though elasticity.

In this connection we derive the following formula.

MR=AR(e-1/e) Where e stands for elasticity.

Short -run Monopoly Equilibrium: Marshall evolved three time period in the analysis of price output determination .A monopolist firm continuously adjust its output with respect to the current and expected sales and cost of production incurred on output .Then monopolist set his market price .Therefore monopolist generally does not distinguish between market period and short period . But the distinction is significant between short run and long run.In the short run monopolist will not be able to change his plant size . He can expand or contracts his output only by changing his variable factors.

Short-run equilibrium (with profit) under monopoly : 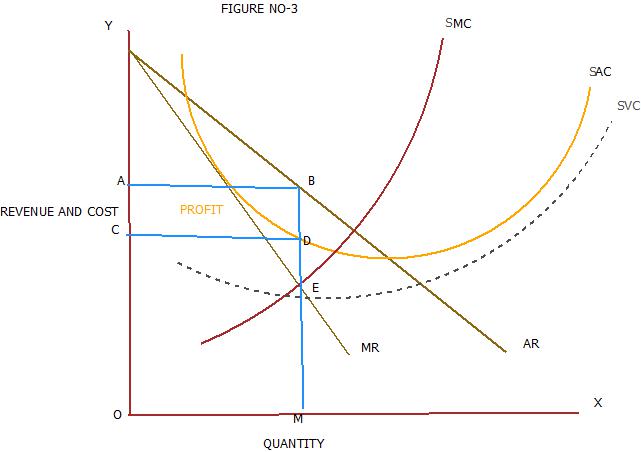 At the point of equilibrium,MR=MC

Since e/e-1 is more than one for a given value of elasticity, it is obvious that under monopoly:

Marginal cost under perfect competition associate prices with quantity to be produced and supplied. But in case of monopoly price is higher than marginal cost and does not associate price and quantity to be produced .Thus the marginal cost cannot function as supply curve .Therefore no monopolist firm will produce on that portion of demand curve (e<1) which gives him negative marginal revenue so also reduces his total revenue. But production of marginal unit adds to his cost. Therefore it concludes that monopolist equilibrium lie somewhere above the middle point of the average revenue curve ,where e>1.

Short-run equilibrium (with losses) under monopoly: 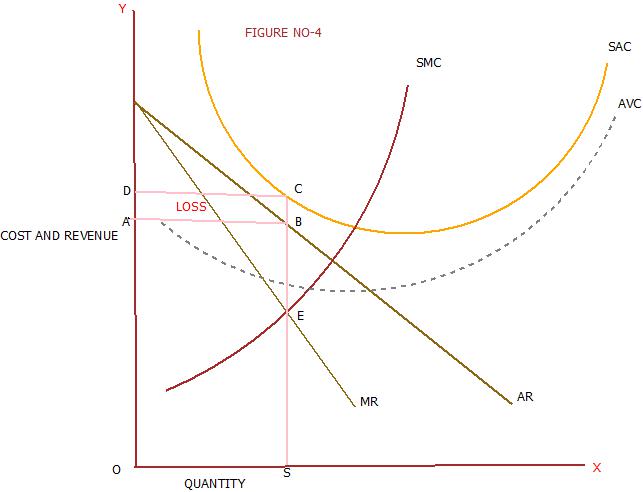 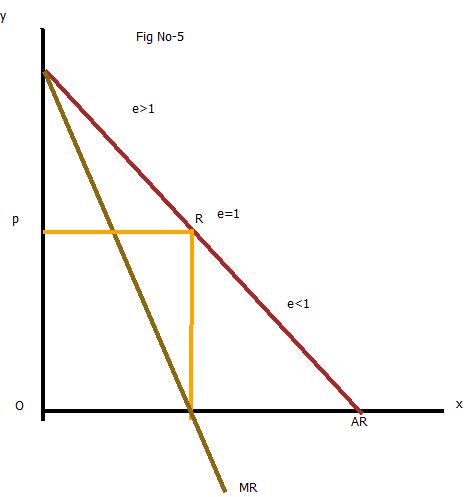 In the above diagram monopolist equilibrium is established at point E at ON level of output at which marginal revenue is zero and OP price is determined. ON quantity of output will yield maximum total revenue and beyond this marginal revenue becomes negative which means total revenue start declining. Since cost of production is zero, the whole revenue will represent profits. As at ON level of output MR is zero and corresponding to zero marginal revenue, elasticity of the demand on the average revenue curve is equal to unity. If the marginal cost is positive ,monopolist will be in equilibrium at the point where the elasticity of demand is greater than one.

1.Discuss the main features of Monopoly.

2.Show with diagrame, how does a firm achieve equilibrium in monopoly in the short run?

3.Discuss the monopoly power of a single firm.

4."A monopolist can always make profit,be it under rising costs or falling costs or constant costs."Draw a set of three diagrams to illustrate this statement.

5.In theory ,a monopolist should make profit, but in practice some monopolists(like the State Electricity Board or some other public sector units) are often found to incur huge losses.How would you explain this situation?