As we look around,most of things we see are solid substance rather than liquids and gases.The solids are the substance which have definite volume and shape.Solids have regular order of their constituent particles(Atoms,molecules or ions.)These particles are held by strong forces,they present at fixed positions.The properties of the solid not only depend upon the nature of the constituents but also on their arrangements and the types of forces which hold the constituent particles together in tightly arrangement.

Points to be verified through out this chapter

Classification of solids based on different bindind forces:molecular,ionic,covalent and metallic solids.

Calculation of density of unit cell

Packing in solids,voids,number of atoms per atoms per unit cell in a cubic unit cell

As We know that matter exist in three diffrent physical states namely SOLID,LIQUID and GAS.under a given set of conditions of temperature and pressure,the most stable state of substance depends upon the net effect  of two opposing forces;intermolecular forces and thermal energy . ====

Characteristic properties of solids are: =

Solids can be classified on the basis of nature of order present in the arrangment of constituent particles in to two typesas:


The substance whose constituent particles are arranged in a definite geometric pattern are called CRYSTALLNE SOLIDS.

The Crystalline substance are said to have LONG RANGE ORDER.

The substance whose constituent particles are not arranged in any regular arrangment are calledAMORPHOUS SOLIDS.

The amorphous solids are said to have SHORT RANGE ORDER.

Difference between crystalline and Amorphous Solids

Amorphous substance have physical properties same in all direction and are called ISOTROPIC.

Crystalline solids can be cleaved along definite planesWhen cut with a sharp edge tool.eg:- Knife

The Crystalline solids can be classified into following four types.depending upon nature of intermolecular forces.

These are crystalline substance in which the constituent particles are molecules.

They are furthure divided in to 4 sub categories

These comprise of molecules of substances formed by polar covalent bonds.for example,solid HCL,solid SO2 etc.The molecules are held together by strong releatively stronger dipole-dipole forces.

The molecules of such solids contain hydrogen bonds between them.for example,Solid water(ice)

These solids consists of positively and negatively charged ions arranged in a regular manner throughout the solid.ions are held together by strong coulombic(or electrostatic) forces.In ionic solids,the constituent particles are IONS.

Chracterstics of ionic crystals are:

Common examples of ionic crystals are:

In metalic crystals the constituent particles are positive ions.The electrons in metallic crystals are mobile and are evenly spread out throughout the crystal.Each metal atom contributes one or more electrons towards this sea of mobile electrons.

The examples of metallic crystals are Comon metals such as nickel,copper,alloys.

4. Covalent  or  Network solids or  crystals

In covalent crystal,the constituent particles are Atoms which are linked together by a contiuous system of covalent bonds throughout the crystal.

They are also giant molecules.

The examples are Diamond,Quartz,boron nitride (BN).

A regular arrangement of the constituent particels (atoms,ions, or molecules) of a crystalline solids in three dimensional space.

A UNIT CELL IS

The smallest repeating unit in space lattice which when repeated over and over again produces the complete crystal lattice.

Parameters of a Unit cell

A unit cell is characterized by

Characteristics of a crystal lattice

1- PRIMITIVE UNIT CELLS:-  These are unit cells which have points only at the corners.They are also called simple unit cell.

2- BODY CENTERED UNIT CELLS:- The points are present at the corners as well as at the body centre of unit cell.

3-  END CENTRED UNIT CELLS:-    The point are present at all the corners and at the centre of any two opposite faces. 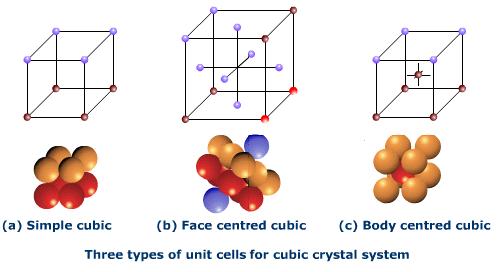 1- Cubic.-   All the three axes are equal of length and are at right angles to each other (a=b=c,all angles=90o)

2- Tetragonal.-The three axes are at right angles to each other but only the two axes are equal (a=b not =c all angles=90o)

3-  Orthorhombic.- It has three unequal axes which are at right angles to each other (a not=b not=c.all angles=90o)

4-  Monoclinic.- The three axes are of equal length length which are inclined at the same angle but angle is not equal to 90o.

6- Rhombbohedral.- The three axes are of equal length which are inclined at the same angle but the angle is not equal to 90o.

7-Triclinic.The three axes are of equal length,and all angles are diffrent but none is perpendicular to any of theothers.

1- Simple or primitive. It has points at all the corners of the unit cell.

2- Body centered cubic unit cell (bcc). It has points at all the cornersas well as at the centre of the cube.

TYPES OF CUBIC CRYSTALS AND NUMBER OF ATOMS PER UNIT CELL

The unit cell may be represented in three diffrent ways.

(A)-Close packing in one dimension

1-Electronic imperfections:- These correspond to defect in ionic crystals due to the electrons.

2-Point defects or Atomic Imperfections:-The defects which arise due to the irregularities or deviations from ideal arrangement of atoms around a point or an atom in a crystslline substance are called point defects or atomic imperfections.

(i) Vaccancy defect. When some of the lattice sites are vacant,the crystal is said to have vacancy defect.

A. Defects in stoichiometric crystals.

B. Defects in non-stoichiometric crystals.

A.Point defects in stoichiometric crystals Stoichiometric compounds. Are those in which the number of positive and negative ions are exactly in the ratios indicated by their chemical formulae.In these types of compounds two types of defects are generally observed.

1.Schottky defect This defect was discovered by German scientist Schottky in 1930. It arises if some of the atoms or ions are missing from their normal lattice sites.The lattice sites which are unoccupied are called lattice vaccancies or holes. Conditions causing Schottky defects.This type of defect is usually observed in strongly ionic compounds having (i) High co-ordination number,and (ii) Ions of almost similar sizes. Eg-Nacl,KCL,Cscl.

This defect is also known as interstitial defect.

B.Point defcts in Non-stoichiometric crystals The compounds in which the ratio of positive and negative ions prsent in the compound differ from that required by ideal chemical formula of the compound are called non-stoichiometric compounds. Two types of point defectsmetal acess and metal deficiency defect. (A) Metal Excess defect-May arise due to the following two ways.

(B) Metal Deficient Defects-These may arise due to two ways.

These defects in ionic crystals arise due to the presence of some impuritiy ions at the lattice sites.

There is a close releationship between the properties of a solid and its composition and structure.some of them are :-

Solids exhibit an intresting range of variation of electrical conductivities extending over 27 orders of magnitude.

Solids can be classified into three types:(i) Conductors (ii) Semi-conductors (iii) Insulators In metals,conductivity strongly depends on the number of valnce electrons available per atom.

(2) Magnetic properties of solids:- Each electron in atom has magnetic moment which originates from two sources:

(i) Orbital motion around the nucleus.

(ii) Spin of electron around its own axis.