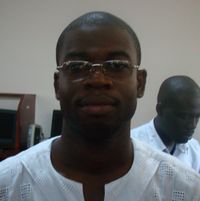 Richard Ohene Asiedu is a young enterprising and smart lecturer in the Department of Building Technology in Koforidua Polytechnic. I currently lecture Strength of Materials in HND first year and Related Studies and Trade Drawing in CTC Part I.

Employed in September 2009 as a lecturer and researcher. Currently the Academic Board Representative and Liason Officer for the Departmetn of Building Technology

Employed between February 2009 and August 2009 as a Project Manager. Projects managed include

Employed between September 2004 and April 2007 as a Quantity Surveyor. Major responsibilities included preparing of monthly claims, pricing of BoQ's, estimation, preparation of programme of works, writing of technical letters and representing company at site meetings. Major projects workedd on include