Arrangements of electrons in the orbitals of an atom is called its electron configuration.

To write the electron configuration of an atom one must recall how many orbitals are in each type of sublevel. For an example Hydrogen has one electron. It is in shell number 1. With only one shell Hydrogen has one subshell - 1s and one orbital s orbital (the 1 stands for the energy level or shell number 1, the s denotes the orbital type). The electronic configuration of H is therefore 1s1 - meaning that there is only one electron in the s orbital. Remember: an orbital is capable of carrying 2 electrons, but H has only one electron.

1s1 is a short-hand notation which identifies the level, the sublevel and the number of electrons in the sublevel for H atom.

The same information about H atom can be given using orbital diagram:

This can also be displayed using the energy level diagram. 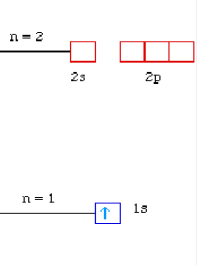 So we have three ways to represent the electron arrangement in an atom using an example of H atom:

All three ways are useful

Let us take another atom – Helium. It has 2 electrons.

Its electron configuration will be 1s2

The orbital diagram for Helium is

The second electron goes into the 1s orbital with the opposite spin to the first electron.

When the third electron is to be placed it must go into the second level/shell because the first level is filled and can not accommodate any more electrons. The second level has 2s and 2p subshells.

According to Aufbau principle, the electrons are to be placed into the orbital of lowest energy first. 2s subshell has a lower energy than 2p subshell, so it will be filled before 2p.