New Zealand Student sit NCEA in years 11,12 and 13 of schooling. Studyit is a very helpful website for students. This is a work in progress.

These rules are in relation to a point of intersection. Rays or lines can intersect at a point. Rays start at a point and go on for ever, lines go on forever in both directions.

Angles at a point add to 360 degrees 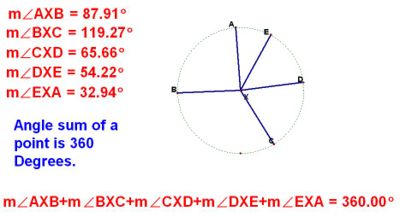 There can be 2 or more angles at a point. It does not matter how many angles there are or the size of the angles. The important thing is that they will always add to 360 degrees.
The example shown has 5 angles which add to 360 degrees.

Adjacent angles in a straight line add to 180 degrees 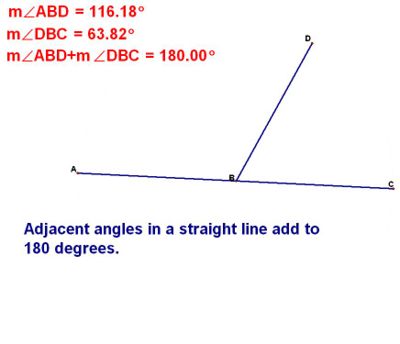 A straight line is 180 degrees, half a turn, or half of 360 degrees. When a ray starts at a point on a line the adjacent (side by side) angles will always add to 180 degrees.

Vertically Opposite angles are equal 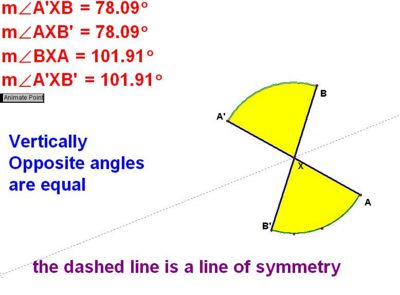 The proof for this is simple. Think about the straight line rule. The Vertically Opposite rule has 4 sets of "angles on a straight line" so the yellow angles must be equal. Also the dashed line show the line of symmetry.

A 3 sided polygon is called a triangle.

Angle sum of a triangle is 180 degrees 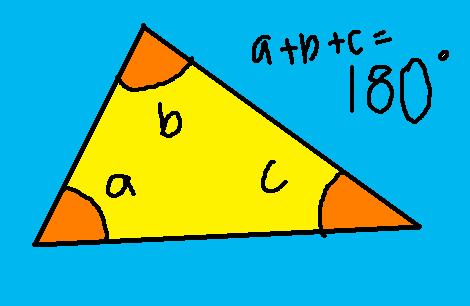 The proof is that any triangle tesselates. You can make your own triangle and tear it into 3 pieces, the 3 pieces will lie in a straight line. 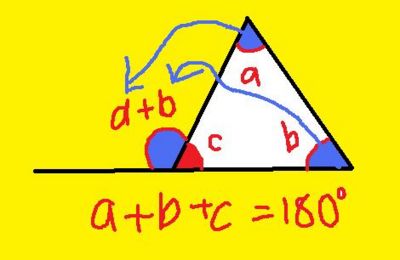 Base Angles in an isosceles triangle are equal 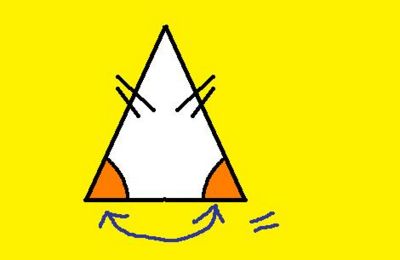 Angle in an equilateral triangle are 60 degrees 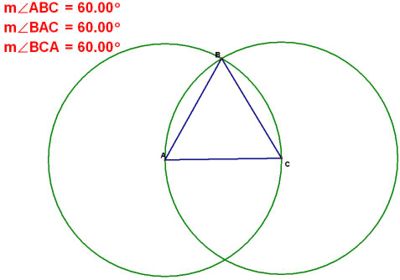 The visual proof works like this: The two circles share the same radius, therefore the 3 sides of the triangle drawn are the same length. Because the resulting shape has 3 equal angles because of the symetry, the angles must be 60 degrees because angles is a triangle add up to 180 degrees. 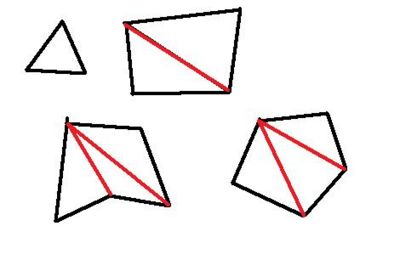 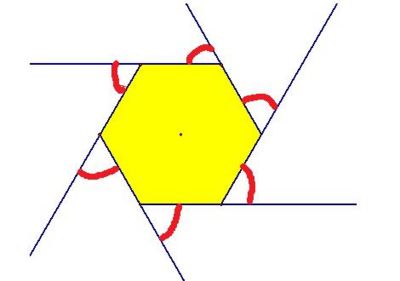 No matter how many sides a polygon has the exterior angles add to 360 degrees because you must end up where you started, turning a full circle.

We know the external angles of any polygon add to 360, and an n sides polygon has n external sides. Because in a regular polygon all the angles are equal we can calculate their size by dividing 360 by n. 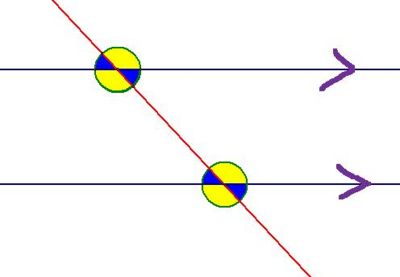 The transversal is the red line, the other two lines are parellal to each other which is indicated by the arrows. The 'big idea' here is that all the yellow angles are equal and all the blue angles are equal. 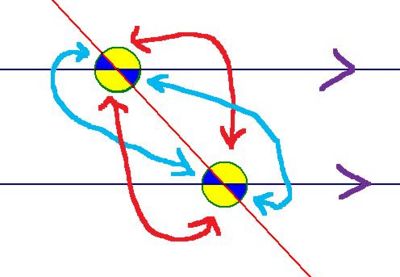 The arrows are pointing out the four pairs of corresponding angles. 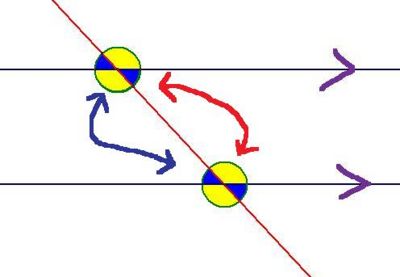 The arrows are pointing out the two pairs of cointerior angles. 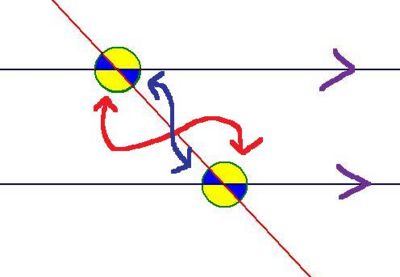 The arrows are pointing out the two pairs of alternate angles. 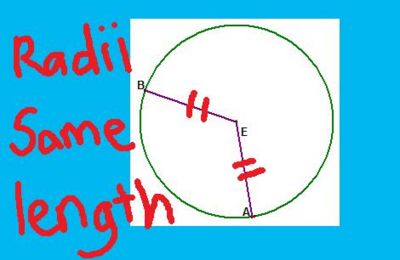 These rules are all extensions of the isosceles triangle "base angles are equal" rule, angles on a straight line and angles at a point. If you spend time understanding the connections between the above rules and how they prove the rules below it will be easier to remember all the rules for assesment.

Angles at the centre is twice the angle at the circumference 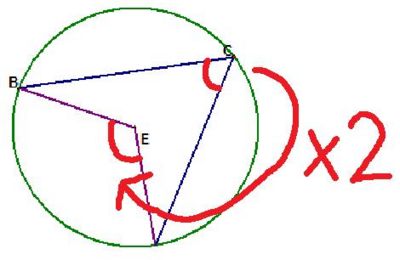 The proof of this is to create two isosceles triangles. 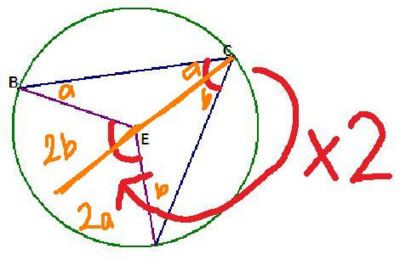 Angles from the same arc are equal 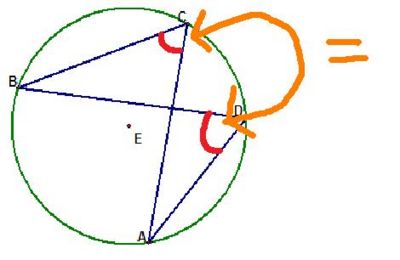 This is automaticly true if "Angles at the centre is twice the angle at the circumference" is true. 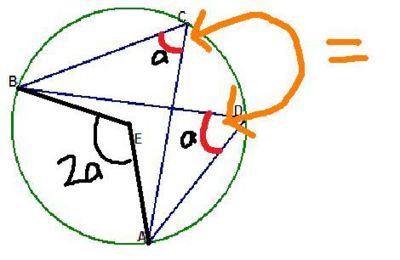 To prove this concider the angle at the centre rule.

Angles in a semicircle are 90 degrees 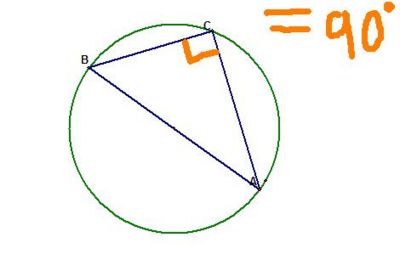 The angle between a tangent and a radius is 90 degrees 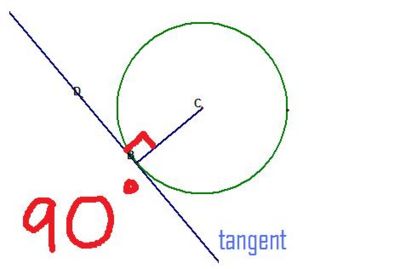 As a tangent is a line that touches the circle at only one point, it must touch at right angles to the radius at that point.

Opposite angles in a cyclic quadrilateral add to 180 degrees 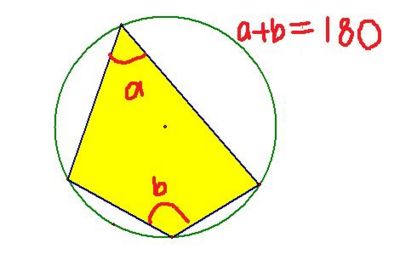 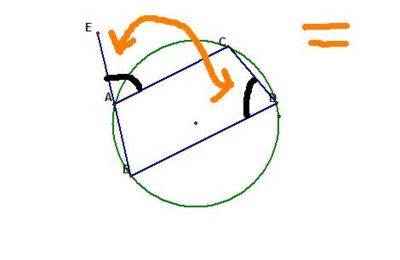 This extends from "Opposite angles in a cyclic quadrilateral add to 180 degrees" and "Adjacent angles in a straight line add to 180".

If there is a line of symmetry then the angles that are reflected in the line will be the same.

Label the obvious ones first.

Extend line segments to see the connections a different way.

Draw an extra parallel line if you think it may help.

Turn the book around to see the problem from another angle.