Legend has it that any man or king who creates a new city in Delhi will not be able to last his rule. But legends have not stopped Delhi's conquerors, who came, saw and named new cities through the centuries. Seven principal cities were chiefly created by different rulers - some of them are no more than villages today with splendid ruins and tales of valour while others have assimilated with the modernistic skyline. The ruins are also a telling tale of the evolution of architectural styles of the times and the synthesis of various cultures and influences.

Seven Cities Of Delhi are :

Although Delhi had been a thriving city for several centuries, the ' first city ' of Delhi dating to 10th century gets its recognition due to the availability of recorded historical facts. Qila Rai Pithora was created by Prithviraj Chauhan, also known as Rai Pithora, the popular hero of the stories of Hindu resistance against Muslim invaders. Prithviraj's ancestors captured Delhi from the Tomar Rajputs who have been credited with founding Delhi. Anangpal, a Tomar ruler possibly created the first known regular defense - work in Delhi called Lal Kot - which Prithviraj took over and extended for his city Qila Rai Pithora.The ruins of the fort ramparts are still partly visible in the area around Qutab Minar. 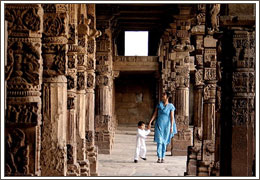 Prithviraj Chauhan was defeated and killed in battle by Mohammed Ghori in 1192, who left his slave Qutubuddin Aibak as his viceroy in India. In 1193, Qutubuddin Aibak captured Delhi, which was still in the hands of the Chauhans. After the death of Mohammed Ghori in 1206, Qutubuddin enthroned himself as the first sultan of Delhi - Delhi thus became the capital of Mamluk or the Slave dynasty, the first dynasty of Muslim sultans to rule over northern India. From the date of its new captors, Delhi felt the impact of their culture and faith and continued to do so for the next six and a half centuries. Much of this was in architecture, as Qutubuddin set about to create Mehrauli, by destroying Hindu temples and building Islamic structures in their place. One of these was the tower of victory - the 72.5 m tall Qutab Minar, finally completed in 1220 AD, which still stands. Around Qutab Minar are several ruins from the 11th and 12th c,including the mausoleum of Saint Qutubuddin Bakhtiyar Kaki, Shamsi Talab, a mosque and tombs of rulers. Qutubuddin's heirs reigned until 1290; Razia Sultan, his grand daughter who ruled for a mere three years is a historic figure as the first woman empress of India. 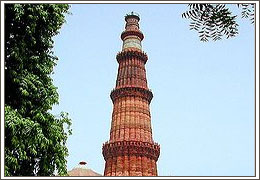 The 'Slave' dynasty of Qutubuddin was followed by the line of Khilji rulers . Among the six rulers of the Khilji dynasty, Allauddin Khilji is the most well - known -who extended his dominion down southern India too, and created the third city of Delhi, Siri.The Saljuqian influences are the most remarkable feature in the buildings from this period.This came about as craftsmen from the Saljuqian dynasty in west Asia reeling under Mongol invasions took refuge in the Delhi court and contributed to its architecture. A large reservoir called Hauz Khas was another accomplishment of city of Siri. A madrasa (college) was also created here by later rulers. Hauz Khas today is a complex of chic boutiques against the ruins of an ancient fort while Siri is represented bystretches of thick stone walls. 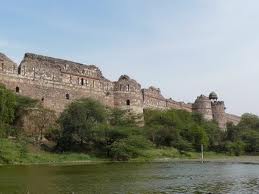 In the 1320s Ghiasuddin Tughlak , a Turk governor who had his strong hold in the western provinces invaded Delhi, and won it from Nasiruddin Mohammed(a Pawar Rajput who had adopted Islam and had gained kinghood by slaining the last Khilji ruler). Tughlak, known as a headstrong tyrant, created the third city of Tughlakabad. He created a fort here (the splendid ruins still remain ) with high battlements and his descendant Mohammad Tughlak went on to capture much of India. He also raised a city, Jahanpanah, which largely comprised a walled enclosure between Qila Rai Pithora and Siri. This is sometimes called the fourth city of Delhi. Tughlakabad, however, continued to be the main city. There were eleven rulers from the Tughlak dynasty but only the first three generations were interested in architecture-raising mosques, caravansarais, madrasas and laying canals. 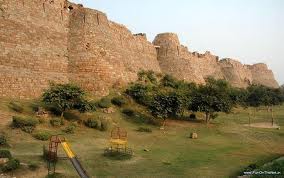 One of the Tughlak rulers,Firoze Tughlak created the fourth city of Delhi , Firozabad or Kotla Firoze Shah next to the river Yamuna. This was a large enclosure of high walls , containing palaces , pillared halls , mosques, a pigeon tower and a water tank. On the top of his palace, Firoze planted an Ashokan pillar from 1500 years ago. He also built several hunting lodges in and around Delhi, as well as mosques, some of which still remain. Apart from raising new buildings, Firoze Shah also repaired old ones,such as Sultan Ghori's tomb,Qutub Minar,Suraj Kund and Hauz Khas. ( Firoze Shah's tomb, a lofty structure, lies in Hauz - Khas. ) After Firoze Shah's death, the sultanate became politically unstable and in 1398, the Turk ruler of Samarkand Taimur invaded India - creating havoc in the cities of Delhi, looting, killing and plundering. He captured Firozabad, prayed at the mosque and went back to Samar - kand with the goodies.Today, Kotla Firoze Shah is famous for its sports stadium - a common venue for cricket matches. The Sayyid and Lodhi dynasties that followed the Tughlak dynasty were far more concerned with restoring stability than patronisation of arts or architecture.Tombs erected in the honour of the rulers are the only monuments of these times (most famous: the tombs at the Lodhi Garden). Architectural glory returned with the Mughals. 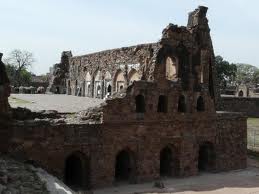 What is known as the Purana Qila today,was the creation of Sher Shah when he wrested Delhi from Humayun in 1540,the second Mughal king. It was originally being built by Humayun as his capital Dinpanah. Sher Shah razed Dinpanah to the ground and started building his own capital introducing ornate elements in architecture. Delhi was won back by Humayun not very many years later in 1555 and he completed parts of the Purana Qila left unfinished by Sher Shah.The ruins of Humayun and Sher Shah's creations are today a big tourist attraction - a sound and light show is held here in the evenings and the well-laid parks are a delight to walk on. 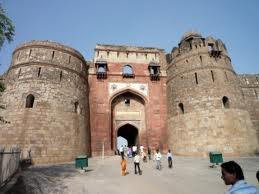 Humayun's son Akbar is known as one of the greatest Mughal emperors . However, he concentrated his construction feats in Agra and the later abandoned city Fatehpur Sikri. It was his grandson Shahjehan, the man who gave the Taj Mahal to the world, who created the city of Shahjehanabad, the seventh city of Delhi - in the area that is now known as Old Delhi. The Jama Masjid and the Red Fort are two excellent examples of the architectural splendour of the 17th c. The intricate lanes of the 'walled city', its bazaars and way of living seem to exist in a time warp. Indeed, the remains of Shahjehanabad are a must-do for tourists. 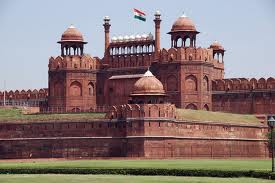