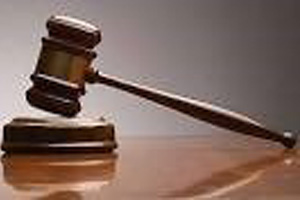 A Murder Suspect Appeared Before Court

A 25 year old man on Tuesday appeared before Broadhurst Magistrate for allegedly murdering a security system employee who was on duty.

Unemployed Kagiso Serema of Tsholofelo ward in Broadhurst was not asked to plead to the charges when he briefly appeared before Broadhurst Magistrate Ruth Simmons. According to the court papers, the accused murdered Kabo Jong (33) who was on duty that fateful night. The incident allegedly happened on the 12th of April 2014 in Broadhurst Tsholofelo, where the victim was on duty as a night watch man at premises belonging to a Gaborone business man.

The prosecution led by Inspector Ofentse Pelontle argued that the man should be detained as their investigations are still fresh. “We are still to record statements from other state witnesses,” said Pelontle. The court heard that on the mentioned date the accused allegedly used a sharp instrument to murder the victim. An eye witness Lebogang Segaisi gave the following account of the murder: It was around 22.00 when the accused tried to break-in one of the houses the victim was looking after, unfortunately the security alarm went on, the victim saw the accused running away and he chased him.Upon apprehending him, the accused stabbed him with a sharp object on the neck. The victim died on his way to the hospital and the suspect was arrested the same night.

“When I asked him why he killed him he simply said with a sad face ,I did not mean to kill him I was trying to make him leave me because I was afraid of the mob that was coming behind him,’ said Nico Serema , the accused’s brother. The victim hailed from Lerala where he was laid to rest on the 19th of April 2014. Magistrate Simmons ordered that the man should be detained. The case continues. 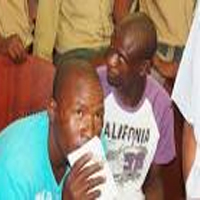 Showa Maposa (20) and Willington Sibanda (24) are accused of murdering Boyce Mariri of Segoditshane ward in Broadhurst. They were not asked to plead because investigations are still on going. Gaborone Central Police Station Assistant Superintendent Agang Keitirile said the accused persons hit the deceased with a metal rod during an argument at a shebeen in Maruapula.

Mariri who was employed as a taxi driver in Gaborone died on the spot. Speaking outside the court, the deceased sister Patricia Mariri (38), said had the police arrived earlier her brother’s life would have been saved. “I immediately called the Police when I found my brother lying down motionless but they came after six hours when he was already dead and they failed to cover him or take him to the hospital saying they are waiting for their camera man.” The distraught sister went on to lament the dangers and risks associated with shebeens in Maruapula were she resides too.

Assistant Superintendent Keitirile however said that he was not aware of the accusations leveled against his station and he would therefore investigate the matter. Meanwhile the two accused youth have been remanded in prison awaiting their next mention. The case will be referred to the High Court when investigations are complete. 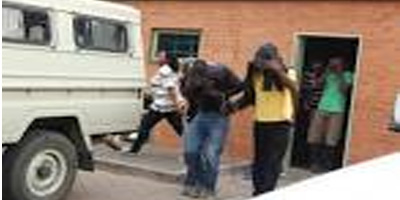 The Village Magistrate court has denied bail to four men accused of murdering an Indian business man in Gaborone North on February, 14th this year.

Delivering her ruling on the bail application, Village Court Magistrate Chief Mrs Linah Mokibe said the court had satisfied itself that the four accused that were denied bail, Edwin Mogorosi, Edward Mogorosi, Duncan Selibe and Lucas Mpatle had criminal cases before and were a danger to the society as argued by the state.

Edwin Mogorosi and Mpatle had a previous pending case of burglary and theft before Broadhurst Magistrate Court while Selibe and Edward had a previous conviction for a charge of robbery and house breaking. The Magistrate further told the court that although accused persons were normally deemed innocent until proven otherwise, it was the duty of the courts to balance the interests of the accused and those of the society before granting or denying bail.

According to the particulars of the offence, the four men who are all residents of Modipane, on the night of 14th of February 2014 at Gaborone North acting together with a common purpose murdered one Abdulla Shallam in his home after robbing him. Police have so far managed to recover some items believed to have been stolen during the commission of the offence. They have recovered a laptop, documents and undisclosed cash belonging to the deceased. Constable Mosadi Dikobe appeared for the state on behalf of Sub Inspector Itseng Omang of Sir Seretse Khama Airport Police Station (SSKA).

High Court judge Justice Garekwe sentenced Kgati to death in January 31, 2013 for the alleged murder of one Keitiretse Moswaana in Sojwe village in the Kweneng District on October 17, 2008. When presenting the appellant’s head of argument defense lawyer Mr. Busang Manewe argued that upon conviction the court misdirected itself in holding that there were no extenuating circumstances and subsequently meted out the mandatory death sentence.

He submitted that there were extenuating circumstances which warrant that a sentence other than death ought to be considered. The defense attorney told the court that the murder was not premeditated as the appellant was under the influence of alcohol after heavy drinking spree of Chibuku on the morning of that fateful day.

In response, the state counsel from the Directorate of Public Prosecutions (DPP) Mr. Julius Mogapi said the appellant premeditated the murder as he left the company of his friends with whom he was drinking Chibuku, followed the victim with the intension to rape her, and later strangled her to death.

When delivering the judgment a panel of three judges said, the murder was premeditated and after murdering the victim the accused did not inform the police nor the community about his crime rather he decided to relocate from Sojwe to Mogoditshane, where he was later arrested after three days. Therefore they rejected his appeal and ordered that he should hang by neck till he is dead. 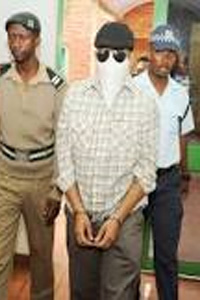 Defense attorney, Mr. Kgosietsile Ngakaagae argued that it would be unfortunate if their bail application was rejected considering the fact that Masilo was arrested immediately after the murder incident. He said just like any other murder accused, Masilo is entitled to bail, noting that there was no how he could skip the border as alleged by the prosecution in their heads of argument Masilo is alleged to have on 9 August 2012 in phase 4 location in Gaborone West, robbed and raped a certain lady of her property through the use of force. The alleged stolen property includes a Samsung and a Nokia cellular phone. Masilo is said to have caused grievously bodily harm to his victim during the process hence killing her.

According to Ms Tirelo Babutsi from the Directorate of Public Prosecutions (DPP) she submitted that they had overwhelming evidence against the applicant as the blood which was found on his clothes matched the DNA of the deceased. She said Masilo was at flight risk particularly that if found guilty his maximum sentence would be death. The court will make its ruling on April 29.