Copyleft (a play of the word copyright) is the practice of offering people the right to freely distribute copies and modified versions of a work with the stipulation that the same rights be preserved in derivative works down the line.

Copyleft is a form of licensing and copyright law, and can be used to maintain copyright conditions for works ranging from computer software, to documents, to art. In general, copyright law is used by an author to prohibit recipients from reproducing, adapting, or distributing copies of their work. In contrast, under copyleft, an author may give every person who receives a copy of the work permission to reproduce, adapt, or distribute it, with the accompanying requirement that any resulting copies or adaptations are also bound by the same licensing agreement. 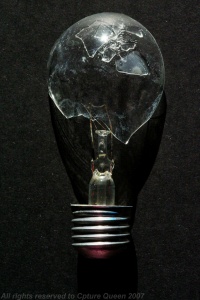 This is a light bulb that depicts an idea

Copyleft licenses (for software) require that information necessary for reproducing and modifying the work must be made available to recipients of the executable. The source code files will usually contain a copy of the license terms and acknowledge the author(s).

Common practice for using copyleft is to codify the copying terms for a work with a license. Any such license typically gives each person possessing a copy of the work the same freedoms as the author, including (from the Free Software Definition):

(Note that the list begins from 0 as a reference to computer programming, where zero-based numbering is prevalent.)

These freedoms do not ensure that a derivative work will be distributed under the same liberal terms. In order for the work to be truly copyleft, the license has to ensure that the author of a derived work can only distribute such works under the same or equivalent license.

The strength of the copyleft governing a work is an expression of the extent that the copyleft provisions can be efficiently imposed on all kinds of derived works. "Weak copyleft" refers to licenses where not all derived works inherit the copyleft license; whether a derived work inherits or not often depends on the manner in which it was derived.

"Weak copyleft" licenses are generally used for the creation of software libraries, to allow other software to link to the library, and then be redistributed without the legal requirement for the work to be distributed under the library's copyleft license. Only changes to the weak-copylefted software itself become subject to the copyleft provisions of such a license, not changes to the software that links to it. This allows programs of any license to be compiled and linked against copylefted libraries such as glibc (the GNU project's implementation of the C standard library), and then redistributed without any re-licensing required.

"Full" and "partial" copyleft relate to another issue: Full copyleft exists when all parts of a work (except the license itself) may only be modified and distributed under the terms of the work's copyleft license. Partial copyleft exempts some parts of the work from the copyleft provisions, thus permitting distribution of some modifications under terms other than the copyleft license, or in some other way does not impose all the principles of copylefting on the work. For example, the GPL linking exception made for some software packages (see below). Share-alike

Share-alike imposes the requirement that any freedom that is granted regarding the original work must be granted on exactly the same or compatible terms in any derived work: this implies that any copyleft license is automatically a share-alike license, but not the other way around, as some share-alike licenses include further restrictions, for instance prohibiting commercial use. Another restriction is that not everyone wants to share their work and some share-alike agreements require that the whole body of work be shared, even if the author only wants to share a certain part.