Here is the Assignment on TORSION that i had made in 1st year of my graduation. 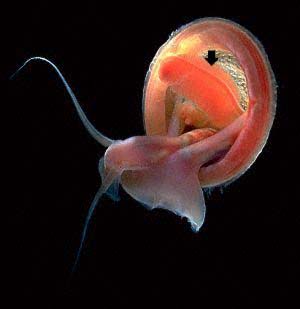 Torsion is a gastropod synapomorphy (the single unique defining characteristic) which occurs in all gastropods during larval development. The process is recognized morphologically by its developmental consequence: a new anatomical configuration in which the mantle cavity, anus, and gill rudiment are positioned over the head. Torsion is the rotation of the visceral mass, mantle and shell 180˚ with respect to the head and foot of the gastropod. This brings the mantle cavity and anus to an anterior position above the head. Torsion has a number of anatomical effects in the adult gastropod: the mantle cavity lies anteriorly and dorsally, the nerve cords between the cerebral and visceral ganglia are crossed, and the gut is twisted into a loop. Torsion has played the most important role in the evolutionary history of Gastropoda. Even though not all gastropods are torted, those that are not have evolved from torted ancestors. Torsion has been regarded as the hallmark of the Gastropoda, the evolutionary novelty or shared derived character defining this class of molluscs. When treated as a homologous feature throughout Gastropoda, torsion tends to take on a structural definition synonymous with the torted anatomical condition.

HOW DOES TORSION OCCURS ??? 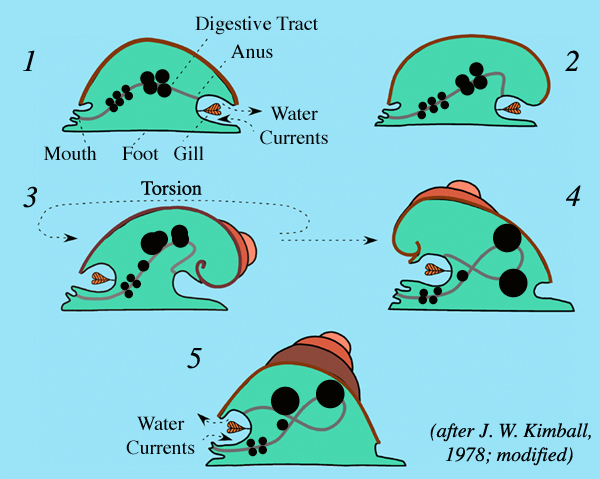 There are two different developmental stages which cause torsion. The first stage is caused by the development of the asymmetrical velar/foot muscle which has one end attached to the left side of the shell and the other end has fibres attached to the left side of the foot and head. At a certain point in larval development this muscle contracts, causing an anticlockwise rotation of the visceral mass and mantle of roughly 90˚. This process is very rapid taking from a few minutes to a few hours. After this transformation the second stage of torsion development is achieved by differential tissue growth of the left hand side of the organism compared to the right hand side. This second stage is a much slower stage and rotates the visceral mass and mantle a further 90˚. Detorsion is brought about by reversal of the above phases. During torsion the visceral mass remains almost unchanged anatomically, there are however other important changes to other internal parts of the gastropod. Before torsion the gastropod has an euthyneural nervous system, where the two visceral nerves run parallel down the body. Torsion results in a streptoneural nervous system, where the visceral nerves cross over in a figure of eight fashion. As a result the parietal ganglions end up at different heights. Because of differences between the left and right hand sides if the body, there are different evolutionary pressures on left and right hand side organs and as a result in some species there are considerable differences. Some examples of this are: in the ctenidia (equivalent to lungs or gills) in some species, one side may be reduced or absent; or in some hermaphrodite species the right hand renal system has been transformed into part of the reproductive system.

The mantle cavity was primitively posterior in position. The increase in the length of the ventral foot, which primitively was very short, tends to remove the mantle cavity and the pallial complex away from the head and its associated parts are shifted forwards.

The digestive tract, which was originally straight from mouth to anus, is thrown into a loop.

The coil of the visceral sac and the shell, which primitively was dorsal or exogastric, becomes ventral or endogastric, after torsion.

The anus is displayed towards the right side of all pallial cavity so that the original symmetry of the organization disappears. Another characteristic feature involving asymmetry is the reduction or atrophy of the paird parts of the primitively left or topographically right side. In the primitive Archaeogastropoda or Diotocardia (Patella, Haliotis, Fissurella etc.) maximum symmetry is preserved by retaining two gills, two auricles and two kidneys, but the right kidney serves as a gonoduct. In the more specialized Mesogastropoda or Monotocardia (Pila, Buccinum, Littornia, etc.), the ctenidium auricle, osphradium, hypobranchial gland and kidney of the topographically right side appear in the dextral forms, but the reverse takes place in the sinistral forms. The remaining gill may bear one row of filaments (monopectinate gill).

The original advantage torsion gave gastropods is unclear. It is further complicated by the fact that torsion brought with it a number of problems. A particular problem gastropods had to overcome come was the location where wastes were excreted – above the head which can potentially lead to fouling of the mouth and sense organs. Nevertheless, the diversity and success of the gastropods suggests torsion is very advantageous indeed. There are many other advantages torsion provided gastropods. For aquatic gastropods the anterior positioning may be useful for preventing sediment getting into the mantle cavity, which is more likely with a posterior positioning due to sediment being stirred up by the motion of the gastropod. In terrestrial species, ventilation is better with anterior positioning. This is due to the back and forth motion of the shell during movement which would tend to block the mantle opening against the foot if it was in a posterior position. Another possible advantage for aquatic species is the osphradium (olfactory sense organs) are moved to an anterior position and are able to sample the water the gastropod is moving into to rather than from, this may help the gastropod locate food or avoid predators.

The changes occurring in torsion are to a certain extent reversible. This reversion is known as Detorsion and it is very characteristic of the whole group of the Euthyneura. As a result, the pallial complex travels back towards the posterior end along the right side, the ctendia point backwards, the auricles move behind the ventricle, and the visceral loop becomes untwisted and symmetrical. In this way, a secondary external symmetry is re-established. Torsion must be disadvantageous to adult snails, as many of them have undergone detorsion processes. Various degree of detorsion are met within the Euthyneura. In the least specialized Opisthobranchia and Pulmonata (Acteon, Bulla, etc.), detorsion is not complete, so that the visceral loop remains partly twisted and the anus and ctenidium are directed laterally, instead of anteriorly. Formerly, this condition was looked upon as an arrested stage in the torsion, but there is the same reduction of the paired parts of the pallial complex as in the specialized Streptoneura. Total detorsion, as shown by the typical Opisthobranchia (Aplysia), is accompanied by a reduction of disappearance of the shell. In extreme cases, as in Pterotrachea, the mantle and the visceral sac also disappear and the body elongates to become worm-like. The mantle cavity, visceral hump, external shell and even ctenidia may be lost, as in Nudibranchia (Aeolts, Doris, etc.). 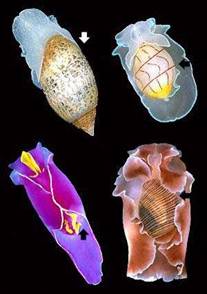 The evolution of sea slugs from marine snails has occurred a number of times in the Opisthobranchia. The cephalaspid Bubble Shells show many examples of how the shell was gradually lost and the animal became larger, more elaborate and brightly coloured. Associated with this is the process of "Detorsion" where the mantle cavity and its associated organs move from above the head down the right side of the body towards the posterior end. The arrow indicates the functional position of the mantle cavity in each species. In the animals illustrated Pupa sulcata with a heavy shell, operculum, and relatively small uncoloured animal, and Bullina lineata in which the animal is larger, the operculum is retained and the shell is becoming thinner. In Hydatina physis, there is a thin shell, large brightly coloured animal, no operculum, and the mantle opening has moved down the right side of the body. In the brightly coloured Sagaminopteron, the shell is completely lost and the "mantle cavity" is reduced to a small posterior flap that does not cover the gills.