This stuff is a placeholder just for now, mostly copied from my institutional home page.

Mark in less than formal mode

I am an Honorary Research Fellow in the School of Computer Science at the University of Manchester as well as being an independent consultant.

The initial motivation for me being here on this wiki is FLNW2's forthcoming Thai venture, I'm on of the on-the-ground participants, and tremendously excited by it all. But the more I look around this wiki, the more I am glad I reached here for other reasons!

What interests me most in the educational world is education systems for learner and community empowerment.

Other interest span a normal-ish gamut, e.g., friends, living life to the full, and so on. I'll expand later.

I have worked as a Senior Researcher for Matsushita Electric Industrial Co. Ltd. (National Panasonic) in their Tokyo Research Lab.

I have also worked for the South African Government directing a team that aligned national stakeholders and planned for the establishment of the Meraka Institute (established in 2005). The initial impetus for the Institute was a Presidential Initiative to help improve the socio-economic status of South Africans by helping build national ICT capacity. My team and I were all directly appointed by the South African Cabinet.

I'm centrally concerned with the empowerment of communities, particularly for the purposes of self-directed and community-assisted life-long learning.

We find ourselves at an interesting juncture in technological development: An increased maturity in the use of web has allowed the development of social software. This development co-occurs with the beginning of massive media convergence and the start of a merging of traditional broadcast media with user generated content. Together, these offer tremendous transformational opportunity for how we go about the business of learning.

My focus is on the design and implementation of computer systems to support online and mixed mode (i.e. online and F2F) communities. Within this I am particularly interested in Personal Learning Environments (PLEs). Currently I'm working with some very bright students building an experimental PLE and looking for funding to take it into production use. We are very much into participatory design with stakeholders and social networking aspects for social constructivism.

I have been a principle investigator for the JISC-funded Manchester Framework Project. This created a framework to instantiate both Virtual Learning Environments and (rather boring) desktop client PLEs that did not have the social networking aspect that I now hold as central in PLE design.

The Manchester Framework includes a Java-implemented virtual file store (VFS) with particularly good access control and 'native' XML processing. The XML facilities are largely due to integration with an embedded XML database (eXist) that provides search across XML files in virtual file store while maintaining access controls. The VFS was given an exemplary rating from external auditors for its code and documentation quality, and is available under an open source license. It is currently being used as a backend in the JISC-funded ASK Repository Project. Please mail me for access to the source code repository.

Since mid-2006, I've experimented with Web2.0 and social software components to construct browser-based PLEs. This represents the other extreme from desktop and desktop client PLEs, such as the Manchester Framework PLE and CETIS's PLEX. The Web 2.0 and social software based approach now claims almost all my PLE interests 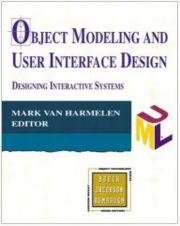 I 'self-supervised' my PhD (University of Manchester, 1986). It was concerned with ring-structured parallel hardware and accompanying software architectures for knowledge manipulation, computer graphics and image manipulation.

Subsequent activities have encompassed interactive systems in general, particularly in respect of human-computer interaction, usability engineering, software engineering, and design methods for interactive systems. Some of my research work included formulating the theoretical basis for the nexus of these areas. Concomitantly, I encouraged the growth of an international community that contributed to a monograph I edited on oohci methods (see right).

I describe the antecedents and history of, and methodological framework for oohci methods in chapter 10 of Object Modeling and User Interface Design: Designing Interactive Systems; here in a slightly modified form, and also in a short set of slides. I remain interested in oohci methods as part of my practice as a working computer scientist. Particularly, I use a participatory oohci design method in my interactive system design activities.

I have taught both undergraduate and post-graduate courses at Manchester (and beyond), and have also made significant contributions to the design of degree programmes. I currently teach a very popular module on Interactive System Design that is part of the Advanced Computer Science MSc Programme.

My interactive system design course is often rated by students as the best course they've done in 3.5 years of university. The course breaks away from the confines of normal HE teaching with a massive experiential learning component.