Consider the following pictures carefully then choose whether you associate each picture with good or bad news; a good or bad omen; or no association. Think about your answers as well as why you have made the particular choice.

Picture 2
What is your association with the colour of this cat? 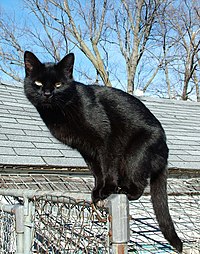 : I recommend using a separate activity template for each image. More flexibility for structuring the pages. --Mackiwg 05:41, 23 October 2012 (UTC))

Alternative for the accident riddle

Try you luck with this riddle 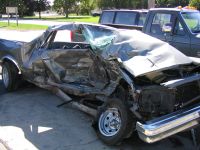 "A man and his son are driving together on a stormy night. They have an accident in which the father is killed and his son badly injured. The boy is taken to the local hospital and requires urgent surgery. He is prepared for the operation and wheeled into the theatre. The surgeon arrives, looks at the boy and says, “I cannot operate on my own son”.

How is this possible?

Fill in blanks. Use your cursor or "tab" key to advance to the next answer. Refresh your browser to try again.

Ask a few friends, colleagues or family. See how they fair with the same riddle.

Microblog activity for the accident riddle

Consider the following claims (or opinions) about two people from different backgrounds.

Peter grew up in the wealthy northern suburbs of Johannesburg.
Therefore, Peter is likely to believe in the values of individuality and the superiority of capitalism.

Paul grew up in the poor suburb of Alexandra.
Therefore, Paul is likely to believe in the value of community and the superiority of socialism.