Sustainability considerations relating to the use of Second Life for education 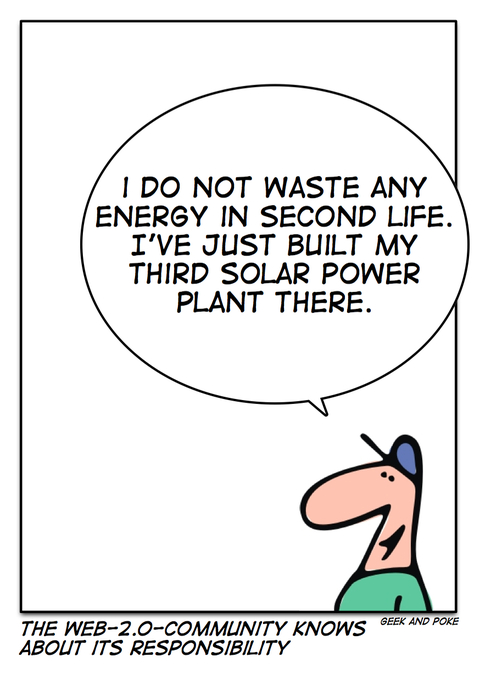 This document is to explore literature relating to sustainability issues in the use of Second Life for education. What is referenced here will be submitted to a working group involved in the progression of a New Zealand research project that is investigating Multi User Virtual Environments MUVEs in education, with a focus on the Second Life platform specifically. The content of this document will be considered by that working group for inclusion in a final literature review. That review will inform later phases of the project where educational models will be developed, tested and critiqued.

Sustainability is a complex and ill defined set of issues in any subject area, or too broad in meaning to be of any use specifically. None-the-less, I'm attempting to find writing that considers economic, ecological and social aspects of sustainability relating to Second Life. I should note that so far as I can tell, formal literature surrounding these issues and directly relating to Second Life is virtually non existent, so I'm tending to look further afield and historically, with what time is available, to find relevant points to bring to this review. I have also relied quite a bit on journalists and bloggers, as well as spokespeople from the industries themselves, for insight on how we might consider these issues at the moment.

For purposes of structuring this review, I have taken the advice of a colleague Samuel Mann and will consider Second Life in terms of direct and indirect impacts on sustainability. I will try to use the samples of writing I have found to outline those two perspectives, and then use that to formulate something of a framework we might use when considering the use of Second Life with sustainability and education in mind.

Direct impacts on resources, waste, pollution and cost of access

The possibility of computer equipment power consumption spiraling out of control could have serious consequences for the overall affordability of computing, not to mention the overall health of the planet. (Luiz André Barroso, Google 2005)

When I log into Second Life, one of the first things I notice is the bandwidth being used just to get around and see what's in there. The second thing I notice is the sound of my computer fan as it works harder to cool powered parts needed to keep me in there. This makes me think of the lifespan of that fan, and of my computer, the access and provision affordability, over all energy use, waste and pollutants, and ultimately the impact this has on ecosystems. For an end user to run Second Life satisfactorily requires newer and faster personal computers and Internet. For many this will mean discarding old computers, resulting in ewaste of the redundant hardware. All of this must flow down the line, compounding into an increased direct or indirect cost for a user to access the services and a likely unaccounted for impact on ecosystems.

On the provision side Second Life requires many servers and cabling, that also requires cooling and protection, all consuming energy and generally producing more polluting waste. In an attempt to get an idea of just how much energy the provision and use of Second Life is consuming, Nicolas Carr (drawing largely from the initial work of Tony Walsh and others at the time) became widely cited for his 2006 Rough Type blog post, Avatars consume as much electricity as Brazilians where he makes a rough calculation of how much electricity an avatar in Second Life consumes and compares that with known consumption rates of people.

...So an avatar consumes 1,752 kWh per year. By comparison, the average human, on a worldwide basis, consumes 2,436 kWh per year. So there you have it: an avatar consumes a bit less energy than a real person, though they're in the same ballpark.
Now, if we limit the comparison to developed countries, where per-capita energy consumption is 7,702 kWh a year, the avatars appear considerably less energy hungry than the humans. But if we look at developing countries, where per-capita consumption is 1,015 kWh, we find that avatars burn through considerably more electricity than people do.
More narrowly still, the average citizen of Brazil consumes 1,884 kWh, which, given the fact that my avatar estimate was rough and conservative, means that your average Second Life avatar consumes about as much electricity as your average Brazilian.
In a comment on [Carr's] post, Sun's Dave Douglas takes the calculations another step, translating electricity consumption into CO2 emissions. (Carbon dioxide, he notes, "is the most prevalent greenhouse gas from the production of electricity.") He writes: "looking at CO2 production, 1,752 kWH/year per avatar is about 1.17 tons of CO2. That's the equivalent of driving an SUV around 2,300 miles (or a Prius around 4,000). (Carr et al 2006)

As far as I can tell, Carr's blog post remains the most cited article on the question of energy consumption of Second Life, and it appears that as yet, no one has done the follow up on it. Tony Walsh continued to keep notes and field comments on the issues for some time on his blog Clickable Culture, and advises that former CEO of Linden Lab, Philip Rosedale maintains an interest in the ecological impact of Second Life.

So far, responses to these direct impacts on economic and ecological sustainability come in the forms of projects like the Big Green Switch - where people can obtain carbon offset credits for their use of Second Life; and the University of Notre Dame's project where they use heat waste from servers to maintain keep warm temperatures in horticultural greenhouses (Adam Stein 2008). The Wikipedia entry for eWaste inlcudes links to projects and legislation to manage levels of eWaste going to landfill.

Second Life is built upon, and relies on our fundamentally familiar relationships to landscapes and social interactions that occur within them. Carolyn MacCaw 2008

Indirect impacts of Second Life on sustainability issues relate more to content and the possible influence this has on people's awareness and appreciation of sustainability issues. On the one hand there are several content projects like the eTopia Eco Village being developed in Second Life that present models and ideas for more efficient resource use, less energy waste, less pollution, and better building design; but on the other hand there are messages implicit in all of these, and throughout the Second Life operating system itself, that arguably reinforce problematic cultural assumptions and behaviors that are fundamentally disrupting sustainability from the outset. Things such as perpetual consumerism, futurism, comodification, culturally inappropriate symbolism, and an inherent preference for human design over established ecological systems, are all prevalent in the Second Life program, including the many user generated models within it.

The model inferred here is highly colonial. Second Life is positioned as a Terra Nullius and this applies layers of colonial meaning and association. (MacCaw 2008)

This opening sentence to Colonial precedent, a section in Carolyn MacCaw's article Art and (Second) Life: Over the hills and far away?, echoes the same sentiments held by Bowers in his book 8 years earlier Let Them Eat Data: How Computers Affect Education, Cultural Diversity, and the Prospects of Ecological Sustainability.

...the Sim series, like all other educational software, ignore other forms of cultural storage and renewal - such as elder knowledge and the need to develop symbolic forms of expression (music, dance, narrative, ceremony) that do not diminish the processes of Nature... [M]aking decisions that involve the use of modern technologies leaves the students without an understanding of the differences between ecologically appropriate technologies and those that are culturally imperialistic. (Bowers 2000: p138)

While Bowers' book was concerned with computers in culture and ecological sustainability generally, his analysis of popular education and simulation software of the time offers us useful considerations we can apply to Second Life. Bowers wanted educators to consider a wider range of issues than simply the content designed for relatively narrow learning objectives. He wanted us to critically reflect on the whole experience that is implicit in the content and the interface, including the computer itself. His premise is that the designs and symbolism used to develop such technology and experiences represent a linguistic colonization of the present by the past, which is ultimately an ecologically unsustainable vocabulary.

Ironically, the technology that is proclaimed as revolutionizing the deepest foundations of culture is rooted in this basic misunderstanding of language. This misunderstanding partly accounts for one of the most important oversights of computer-mediated learning: the symbol systems appearing on the screen reproduce the implicit thought patterns of the software programmers. [Where the programmers themselves are evidently unaware of what they are communicating](Bowers 2000: p123)

If land is not producing economic value then it is un- or under-utilized. Land and its use value become synonymous with ownership.

Danny Butt in his essay on Local Knowledge (2005) proposes three impassable contradictions, related to settler culture, indigenous culture and location. One of these is mapping – the most basic function of the colonial process – Butt writes, functions by turning a profoundly social relationship with the land characteristic of indigenous culture, into data.

And while the designers of Second Life created a land conveniently without indigenous people, its first owner (the Linden Corporation who establishes initial trading rights for each ‘new’ island) and the Linden inhouse building tools frame the world. I suggest that the way that we construct the formation of culture in this empty land draws upon a colonial model and precedents. The research question that follows from these initial considerations is: is it possible to have new empty land that allows for a different model of colonization, or will older models prevail? And how can we consider art in this relationship? (MacCaw 2008)

And I would suggest that we think about this not just in terms of art. It seems to me that any occupation that is concerned with forms of communication, interpretation and learning should take these thoughts into account as well. Quoting Bowers again:

Storybook Weaver not only encourages the student to make decisions about the storyline, but also about the geographical features on which the story will be situated, as well as the animals, plants and types of buildings that will be part of the visual background... The 650 images and 450 scenery combinations that the program makes available to the student provide for a wide range of imaginative possibilities, and this is where the real problem arises.
What the creators of Storybook Weaver view as the expression of students' creative imagination can also be viewed as extreme anthropocentrism. Rather than a knowledge of specific ecosystems and cultural traditions (architectural styles, clothes, technologies, and so on) the student's subjective experience is the basis of learning. (Bowers 2000: p130)

Here is a suggested framework to assess possible aspects of sustainability education using Second Life, and inform a process of design and development for education for sustainability.

While there are several well known projects in Second Life that treat some of the issues mentioned here to do with sustainability, I am yet to find one that attempts to address the full range of issues included in this review (although a combination of some would go close). An educational development using Second Life might consider Bower's questions and use them as a basis to critique existing content in Second Life, taking what is useful and noting what is evidently missing or counter productive, and then devise an educational experience from that.

I have bookmarked to Del.icio.us all writings referenced in this review with the tag word SLENZSUSTAINABILITY