On my main user page I introduce myself in terms of what I feel relates relevantly to the WikiEducator project on For the Love of Science that I wish to pursue.

On this separate subpage I highlight some interests that are additional to my general interest in human learning (see my learning page), but that are less directly related to the above WikiEducator project. Yet, for me those additional interests are an integral part of who I am. I can't explain in rational terms how they interact with my interests in the development of human learning and the building of the scientific mind, except that it is difficult for me to imagine that I could have one of those various interests without entertaining all the other ones at the same time. They feed each other.

While I spend much of my time thinking about human learning and how to improve the conditions for its development around the world, I continue to actively keep myself informed about the latest developments in the natural sciences, particularly by reading on a weekly basis journals such as Science and Nature and by listening to podcasts by those journals and radio programs such as Science Friday. I have to pay for my subscriptions to the two journals, but Science Friday is for free and so are many other interesting things one can easily locate on the Web, such as lectures by top scientists. More about my relationship to science can be found on my science page. 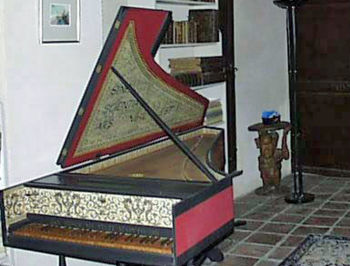 Replica of the four centuries old Hans Moermans Flemish harpsichord at our home in France. 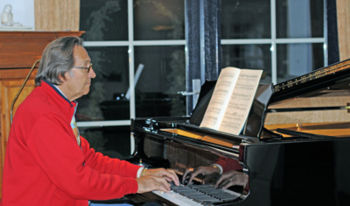 Playing the Steingraeber grand. December 2008, The Netherlands.
Music is another passion of mine. I might never have been able to appreciate the extreme beauty of nature, as seen through the eyes of the scientist who lives in me, if I had not at the same time been moved, from a very early age on, by music. I see music as a way of transcending, of becoming aware of my being part of a wonderfully more complete and complex whole. See my music page for some further elaboration. Except when I am traveling, I play everyday, usually starting at around 11 at night, as shown in the first photo to the right, which was taken in The Netherlands in December 2008. It's a perfect way to unwind before going to bed. Should I be late, Mun Ha, our cat, a Sacred Birman, will come to my office, making it absolutely clear that it's time to stop working and come down to play. He will stretch out on the floor near the piano and listen quietly.

Rehearsing for a house concert in Maputo, Mozambique, in the early 1980's.

Circumstances, though, for making music, may vary greatly. While the previous picture was taken in the heart of winter in The Netherlands, the one immediately below it, also on the right, depicts a scene in Maputo, Mozambique, in the early 1980's in the heat of the tropical summer. Here Frans Nieuwenhuis (violin) and I are rehearsing for one of the house concerts we used to give during those years. Dress on the occasion of public performances would be more formal.

The picture to the left shows one of the musical instruments I built while living in Mozambique. The instrument was completed in 1982. Building it took almost a year. It is a replica of a Flemish harpsichord the original version of which was built by Hans Moermans around 1584. In the photo it is seen at our home in southern France; a suitable setting, considering that the house where it now stands was erected around the same time that Hans Moermans built his Flemish harpsichord. I built several other instruments during those years: another harpsichord, three clavichords, and a guitar. A project to build a lute still awaits implementation. It sits on a shelf in the garage of our French home.

Building one's own instruments enhances the musical experience. The pleasure of playing an instrument one has built oneself can hardly be described in words. Playing such an instrument, being aware of the most intricate and minuscule details of its inner workings, is as if the distance between one's own existence and the music that emerges from and accompanies such existence reduces to almost zero.

I love poetry and, in general, literary expression. As to poetry, I have a clear preference for poems in my mother tongue, Dutch. I especially like the work by Leo Vroman, a haematologist who lives in New York but who continues to contribute most significantly to the Dutch literary heritage. I don't think my preference for Dutch has much to do with the language as such. Rather, I guess it has something to do with the subtle cultural references to the environment in which I grew up as a child, an adolescent and a young adult. Next in line is poetry in the Spanish language. Here it's probably the beauty of the language that fascinates me. I also find Spanish poetry particularly rich in the use of metaphor. For novels and essays, I think I prefer English. - John Coetzee and Nadine Gordimer are among my favorites. 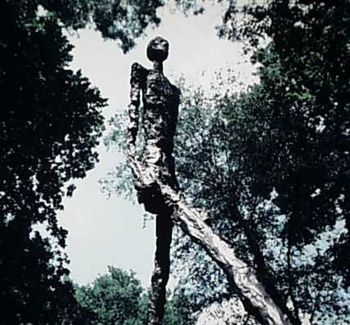 Alberto Giacometti's Walking man, photographed at the 'Hoge Veluwe', The Netherlands, around 1975.

Painting, sculpture, architecture, and photography have my interest as well. I have felt tempted to try my hand at sculpture, but never really found the time for it. One can't do everything. I actively engaged in photography for many years, though. When chemical photography phased out and digital photography was not yet up to standard, I gave up. Now that digital photography has finally developed into a mature technology and a mature art medium, I'm regaining interest in it. The photo to the left of Alberto Giacometti's Walking man dates back to the early period of my photographic career.

The same photograph is also connected with my cinematographic work. It's part of documentary on human interaction with visual art, called Confrontation, which I never finished as other work took over and I moved to another continent. But all the raw material still sits in the cans. Who knows...? Another documentary got finished. It's called The Dream. It's about how Palestinian refugee children see their world and depict it through their drawings.

The image of Giacometti's Walking man equally relates to another crucial aspect of my existence: I am a walker. Walking for me has become my preferred mode of locomotion. I prefer it greatly to using a car whenever distances to be covered are within, say, a five-mile zone. I easily walk distances like 20 kilometers a day. More about this healthy habit can be found at my walking page.

Of late, I have started combining walking with the practice of meditation. When not meditating, I typically take advantage of my long walks for listening to lectures and other interesting audio programs on my iPod. Learning is naturally favored by walking. Well, the ancient Greeks knew that long ago.