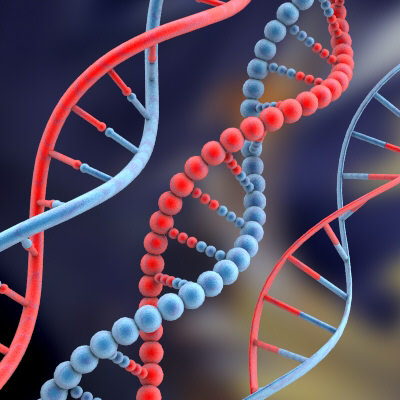 The Human genome project,a worldwide research effort,determined the sequence of the complex chemical,deoxyribonucliec acid (DNA).Known as the book of life ,the genome was deciphered in 2000.Teams in the US ,Britain ,and Europe as well as the private Celera Genomics corporation figured out the thre billion letter alphabets that determine our existence.It is a blue print for an individual.It will fill 750000 pages when typed single spaced on A-4 paper.The work of determining the sequencing the code was virtually completed in april 2003.

The human genome is provided in 46 packets called chromosomes -23 inherited from mother and 23 from the father -or carriers of our genes.This double stranded module is a sequence of nucleotids . The genetic messege is spelled out in four bases,viz.,adenine(A),cytosine(C),guanine(G), and thymine (T),grouped into threes. A pairs with T and G with C to form rungs of a ladder. This quartet of molecules is nearly identical differing chemically by only a few atoms .A typical gene contains several thousand bases.E ach gene is a single instruction for the makeup of a being. This is nature's encyclopedia of information.Untill recently it was thought that a human has about 100000 genes . Latest estimates have reduced the figure to about 30-40thousand only.

Sequencing or DNA decoding is a process that determineas the precise order of the four nucleic acid bases -A,T,G and C that comprises the DNA of all living cells.The genome consists of about 1billion base pairs.

Chromosomes come in pairs;one of each pair is inherited from the mother and the from the father. Though each parent contributes half of his or her genome to the child ,essentially a stanger emerges!Each chromosome is a chimera of the corresponding chromosomes in one of his or her parents.When sex cells are forming (eggs and sperm) the individual members of the 23 pairs come together and swap. The'daughter'chromosomes are seperated to become 23.Where the copies of the chromosomes do not contain the same chemical letters, the gene can lead to disease. These variations on a given chromosome have been the focus of considerable research .

The sequence code is posted on the internet for all to see and study. The essenmtial step has been taken to unravel the secrets of the gene.They are still hidden in a code of four letters, strung over 23 chromosomes. Most genes encode sequences of amino acid that make up proteins.

If one imagines a chromosomes as 1000km long,then a gene is 200m long with a coding region of 10m,a nucleotide is just 1cm long.