I decided to do my map digitally for a couple of reasons, the main one being that I could easily change it and zone in on different areas for different map views. It will also allow me to easily print off copies for sketching out different plans and post it digitally. I actually did it from a a satellite picture and memory because I'm not actually at home right now so will likely be adding to it as I go along. I also like to used color so it was a time saver that way. I used a basic open source drawing program Inkscape

The property slopes down from the road to a low-lying area that bleeds into a large marsh and lake so it is very wet, especially in the spring. The drainage pond slowly dissipates during the summer. The soil is very sandy, with few rocks as the area used to be a lake bed. The area is filled with a mixture of native plants and introduced species commonly referred to as 'weeds', though as a herbalist many of these 'weeds' are very useful. There is a wide variety of inmature and mature trees, pine, popular, ironwood, spruce, cedar and several species of willow. There is one established wild apple and we planted a couple of regular apple trees in the summer. Just off the property there are several more wild apple trees that had more apples on them then I had ever seen and they were yummy to boot.

Animal species that I spotted last year were deer, raccoons,at least 20 different species of birds, more frogs then you could imagine ..(mowing the lawn was quite stressful at times) garden snakes, salamanders, dragonflies and other insects (I lost count) and a pack of coyotes moved into the back area during the winter. The large presence of both frogs, snakes and other insects, like dragonflies signals that the current eco-system is fairly healthy as these species tend to be the first ones that disappear if there are problems.

The previous owners had llamas and we discovered that they just dumped the straw from the barn over a huge area about 50 X 50 ft or more and what we thought was a natural rise is actually what we now affectionately refer to as 'our big pile of poo' and it seems to be at least 4 to 5 ft thick. It is quite compact and partially composted. When I dug up a spot it was the most earthy smelling bit of organic matter that I have ever experienced. Last summer I tried an experiment and planted a couple of tomato plants right into it. I wasn't sure at all because it wasn't actual 'dirt' but they grew like crazy, better then any of my other plants and without any care or watering whatsoever. A good lesson. I'm quite excited about having this ready made resource and plan to use it on other beds and am going to plant a larger area right in it. 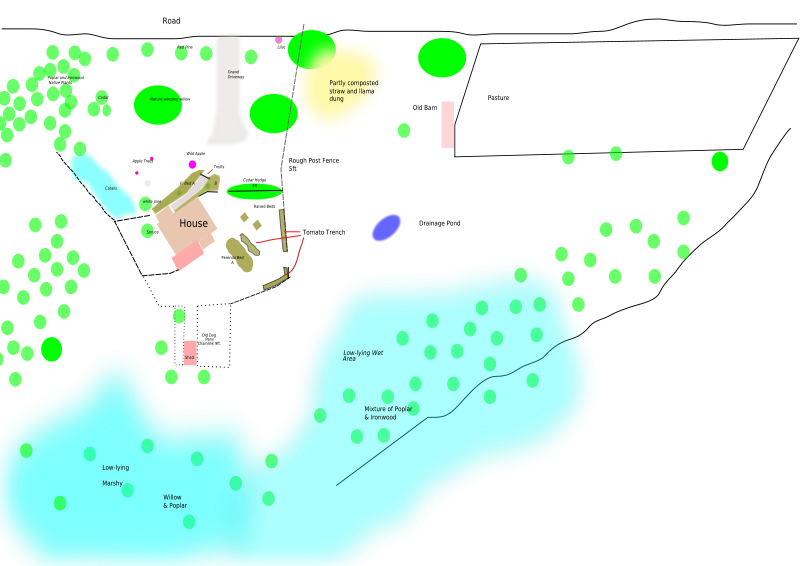 Base Map of Property 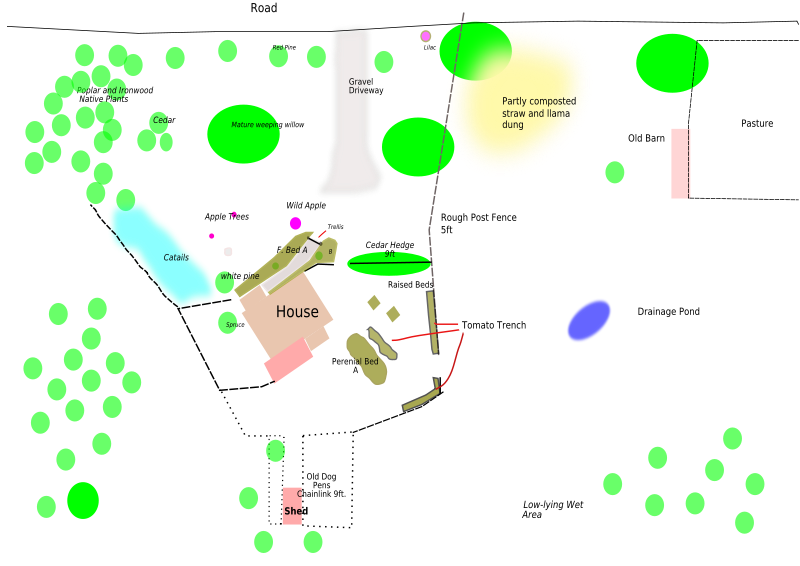 Base Map View 2
Retrieved from "https://wikieducator.org/index.php?title=User:Jadeapple/Odonata_Fen/Odonata_Base_Map&oldid=119149"