I am Isma Seetal, native and resident of a small island in the Indian Ocean called Mauritius. I followed a Bsc(Hons)chemistry course at the University of Mauritius and graduated in 2006. I am currently following a part-time masters program in Educational Technologies within the same institution. I also work as a chemistry teacher in a private secondary school here called Northfields International High School.

Mauritius is found right in the middle of the Indian Ocean. The language, which is most commonly spoken here, is actually the Creole but however the official language is English. It is a multicultural country with its load of Hindus, Christians, Muslims and others

[Mauritius is a small dot on the globe. Find out much more about Mauritius on Wikitravel] 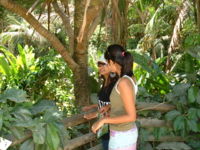 REASONS FOR BEING HERE

Leave me a message

Facebook and hi5 allow me to email, blog, share files, and use other applications to communicate.The whole concept of social networking gains a whole new meaning to me as i find childhood classmates that have moved abroad. I acknowledge the importance of these social networks in education but however its full potential is yet to be explored.