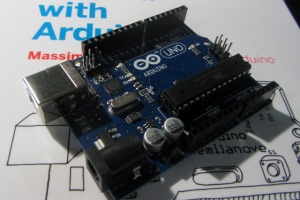 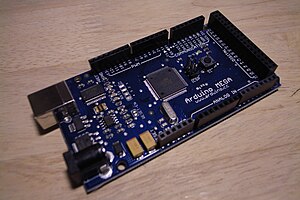 Arduino is a single-board microcontroller, intended to make the application of interactive objects or environments more accessible. The hardware consists of an open-source hardware board designed around an 8-bit Atmel AVR microcontroller, or a 32-bit Atmel ARM. Pre-programmed into the on-board microcontroller chip is a boot loader that allows uploading programs into the microcontroller memory without needing a chip (device) programmer. Arduino boards can be purchased pre-assembled or as do-it-yourself kits. Hardware design information is available for those who would like to assemble an Arduino by hand. It was estimated in mid-2011 that over 300,000 official Arduinos had been commercially produced.[1]