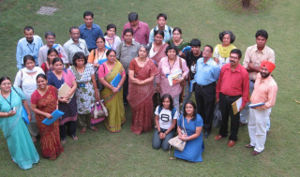 The three day L4C workshop of WikiEd 08 was held in New Delhi from 03-06 Oct,2008 in Acharya Narendra Dev College. The members of the Online Magazine of English Society of DDU college were participants this year.Dr.Pramesh Ratnakar, Dr. Anubha Mukherji Sen along with Samarth,Smriti and Mansi attended the three day workshop.
The workshop was on Open Learning Environment and empowering communities using open source tools and open source content for study at each level of education. The English society of DDU college is committed towards this initiative in future and will provide all possible support for this work.

ECPDT (Effective Communication and Personality Development through theater) and PD as we call it, the best course ever and i think that taking it was the best decision that all of us took. What really attracted most of us to this course was the NSD (NATIONAL SCHOOL OF DRAMA) tag. But it was way more than that. We had some great directors and actors of NSD as our teachers. All the exercises and games were really amazing and most of them were based on body balancing and body language and by exercise i mean physical exercises and they were really difficult. We did several trust exercises like closing our eyes and following our partner with just a touch of their fingertip. We did a similar exercise in which we used all our senses except for our sight. We followed the sound of our teacher's clap and walked barefoot on pebbles, mud and even broken glass (with our eyes closed). We crawled through thorny bushes. Many of us got hurt but this was one of the best exercise and i honestly mean it. Many of our goals of this course were achieved through various plays that we prepared ourselves based on stories written or thought by us. It was called "improvisation". We were given just ten to fifteen minutes to prepare them and we even did various on the spot plays where we had just ten seconds and the situation was given by our teacher. Some of the stories that we wrote were written by us when a symphony was played. We had to write a story based on whatever picture came in our mind while the music was playing. We also worked on voice modulation and some of our plays did not have any language in them.

We derived various benefits from this course. We learnt how to be a leader and how to manage a group in ten minutes or ten seconds. We learn t how to trust strangers because the trust exercises were done in the first class itself when we hardly knew each other. Team work and co-operation was something that none of us were good at when we joined this course but now we are really good at it. We now know how to put your ideas while talking in a group and giving the other person time to speak. There was one exercise in which we had to compare ourselves with an object and all 24 of us compared ourselves to different object like a window, a bag, a scoot y, a walnut, a book, etc. and after that we had to make a picture with all the objects in it and it came out beautifully. You can see the image in the gallery.

Our culmination was really awesome. We performed a play with no help of our teacher. First there were two groups with two entirely different stories. One was based on a story of a college and another one on a village. These stories were entirely opposite to each other and we combined them and performed it on 14th, our culmination day. Then we performed a dance, body movement collage as it is called, on "badal pe pao hai" from the movie Chak De! India. Then was the on the spot improvisation where the audience gave us topics and we performed it within ten seconds.

All of us were really upset after this course ended because we never wanted it to end and we would love to do it again but unfortunately that is not possible. We will never forget this experience and I really hope that after reading this everyone would be tempted to join it next year and please do give it's auditions, it was really helpful and the faculty was really nice.

We would like to thank Dr. Pramesh Ratnakar for starting this course in this college.

But all of us would like to thank MR. ASHISH KUMAR from the bottom of our hearts, a great teacher and a great friend.

The teachers of English Department had organized a discussion seminar with Dr. Nirmalaya Samanta on the topic, literature and art. He was welcomed by the President of the English Society, Harpreet. He said that it is impossible to talk of literature without mentioning about the visual arts. Painting and Sculpturing come under visual arts. Painting started even before coherent words were formed and that can be seen in the caves in Spain where human being painted on the walls of the caves fifteen thousand years ago. Man learnt sculpturing as a part of rituals and customs. Human Beings expressed themselves through structures like the Pyramids.Then he also introduced us to the concept of Helographics. According to hi, it is very important to learn that language come from art. He also mentioned the example of Sanjaya narrating to Dhritrashtra  in Mahabharata, attempting to make him visualize through narration. Literature is an interpretation of art. Existence of literature happens only when it is recorded, sometimes by the artist and sometimes by the writer himself.Then he also talked about the medieval art and paintings in Europe at that time. Then he also discussed about Renaissance and the various artists of that age like Leonardo Da Vinci and Michelangelo. The he also told the relationship between literature and cinema. And while summing it up, he said that we need to internalize to write something. It has to be a personal experience only then can something be created. Then the vote of thanks was given by the Head of English Department, Dr. Anubha Mukherjee and the Vice-President of the English Society, Mansi Grover.
BY: Mansi Grover English(hons)IIyear

Stepens,hindu,srcc,kmc,gargi,national law school,......its not very encouraging if you have all of these as your competitors....So ,there we were 17 brave souls willing to take the risk....Exactly the place where we were all gearing up to go was the fest "OASIS"-BITS PILANI....Here below is an unoffical account or rather a glimpse of all that we did..... we all met early morning for depature for the trip.high spirits.positive outlook.loads of confidence and energy.....we were all set to rock pilani... also the last miniute tips and wishes made me personally feel as if we were representing INDIA at the Oscars! with along journey ahead each one of us was ready to make the most of it...it was only around lunch time that we reached PILANI...trust me the entire fatigue of the journey vanished as soon as we saw the words BITS written on the gate...all of us who were standing lousily ,jumped into an armyman like posture...this place is awesome!!!!!!!!!!! over acres and acres of pure heaven......probably the biggest college in terms of area.. we literally dumped our bag..n rushed to join the excitement...the inaugration ceremony was what that i personally believe is,what i have never witnessed in my life before..

following that we were greated with an elborate fest...and we stuffed ourselfs like kids from a refuge camp...the next 3 days everyone was busy taking part in various competitions like debating ,dramatics,photography,quiz,dance,music etc...trying to prove our worth...

OASIS was a non stop 96 hours fest with a total of 60 events in all and to add to all this was the participation of about 80 colleges...the atmosphere was electrifing...

the 5 days that i spent in PILANI have contributed tremendously and have been a learning experience for me..also, i personally had the time of my life...its something that i would not forget ever.... from watching a rock show at 2a.m to exploring a haunted fort at 1.30a.m ...we did it all...it was overwhellming to see the dedication and spirit that everyone had....OASIS ROCKS!!!!!!

*Zest - Official launch of the English society on 25'th November 2008

LAUNCH OF WEB PAGE It was indeed an auspicious day for all the members of the ENGLISH SOCIETY (ZEST) of DDUC; since our web page had to be launched on 21st November2008.It was a long awaited ceremony and the entire hardwork of the post holders (Smriti Shukla,Samarth Goel and Mansi Grover) and the convener (DR.Anubha Mukherjee Sen) of the Wikieducator team was at stake.


Since the event meant a lot to us;it ought to be launched by some well known personalities in the sphere of 'WEB' , DR.Niyam Bhushan a.k.a. 'THE WEB GURU' was invited to DDUC to launch the webpage and grace the occasion along with our Principal DR.S.K.Garg.DR.Niyam Bhushan is a well known personality among students in India and abroad for facilitating web education and making them realise its importance.


He was equally excited ; since we were the 1st college accross India to form a Wikipage. He said that it was his dream for the past 7 to 8 years to launch a webpage in India and wished his former students were here with him today. He shocked us by sharing a few facts with us; which even you would be after glancing at the undermentioned:

He focused on invoking a culture of sharing and contributing.. He said none is an author, everybody is a contribution who contributes to the world of thoughts and learning.He used T.S. Elliot's words to start the seminar and later switched on to Orlando Evan's "The Silver Swan".He adores Tennyson's poems much more than others because of their different approach towards the life; and focused on organizing an annual event in the college and invite others from the university to discuss "the culture of sharing and contributing". Later he received some quality questions from our teachers and 2nd and 3rd years regarding plagiarism and Linux setup which were accurately answered by him .to him the teacher sometimes goes above the author and considers the author to be the contributors.


Dr. Ratnakar and all the faculty members were mesmerized to listen to his words and thanked Dr.Niyam with a token of appreciation and a few kind words.


On the whole, since the occasion was graced by people like Dr.Anand and Dr.Niyam.


The webpage launch was a success.