This year we took part in international online project with kids from Mullen School from Colorado, USA. Both schools had to read a book called" Night" by Elie Wizel and write different points of view on the book. The project made us think a lot about the Holocaust that is the main subject in the book. I can say sincerely that I enjoyed being part of the project because I could take part in explaining Israel and the Holocaust. We live in reality that not all the people are recognize the holocaust as a real story, and by the project I could see that by some responses that I have read. In this project we had the chance to change that and maybe to convince some kids that this is not a story this is a reality. It was a great experience to share information with kids from other country and I hope that we will continue next year. 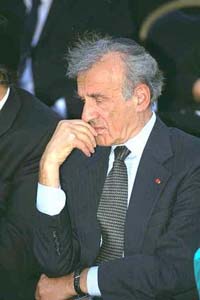 Is There Any Morality to Survival

I think that there is a morality in survival because people had to survive in every way they could, even if they had to make unmoral actions. In the war there is no morality because people lose their humanity, so you can't blame the survival on their actions. Morality is something that was not considered in the war, Nazis didn’t show morality for Jews so when you are in big danger that is the last thing you think about.

I think that this is a complicate situation; see how soldier beat your father is a horrible situation that we can't even think about. Elie didn't loose his love for his father because of that, I think that he experienced a big trauma and he was frozen in that point. When you see someone that attacks you father or friend in such cruel way it takes time to go back to reality and to response for that action.

I think that silence is the best way for a person to deal with hard situations, but on the other hand silence is a repression of things and an escape from reality.

If people didn't talk and tell their story, other people would say it didn't really happen, making the holocaust just a story.

I would like to hear your opinion and to see your point of view.

During the Holocaust, people lost their faith and their religion and actually you can not blame them because of the craziness and the horror. But people can not find the answer to the questions: Where is god Why did he do that? There is a reason for everything, even if we can't think about one, but god's decisions are unknown and unpredictable. I can say for myself that my family lost their faith a little bit only because of the holocaust. My grandfather was dispassionate too, just like Elie. Dispassionate developed during the holocaust because people lost their humanity and wished to kill others. Death in this era was a regular occurence for Jews, and after you live in such reality you lose yourself and your faith.

Hope to see your answer. Have a nice week Eitan.

The current situation in Israel

Hi Michael! I hope that you have a great Christmas, I know that you have heard about the situation in Israel lately and I would like to share with you a little information and tell you about my feelings. Our country is known as a country with a lot of "enemies" and wars, but people in the world do not know anything much about us. I think that the world does not see the entire picture in the Israeli-Hamas conflict, and they choose to see only one side. This operation in Gaza has been really necessary and required for along time, it has to be done because there is no other way. Our country had been attacked and bombed for 10 years in the south by the Hamas and other terroristic organizations. People in Sderot (city near Gaza) have been living in fear for 10 years because there are exposed to bombs for 24 hours. The main goal in this operation is to stop the terror and the bombings in the south. The current situation is that kids do not go to school properly and bombs fall in big cities. In my opinion, Hamas will not understand that it has to stop shooting bombs at Israel if we will not retaliate. It's very important to tell you this because we have been frustrated for along time, no matter what we do the world hates us and understand only the other side.

I Hope that I gave you another point of view on the current situation. Great week! Eitan.

When I read the task I thought that the peak of the foreshadowing is the "crazy" lady on the train that said that she saw fire. I think that this is foreshadowing because she actually discovered what was going to happen with them. The fire that she saw is their coming death in the death camps. I can't think about something else, so that is the only example I found.

Hi Michael! Well my grandparents escaped from Ukraine when the war had started so they weren't in a camp, but they had lived in the forest and in the fields. They told me that when the Germans came to their city they killed people in the streets in front of their families so my grandfather saw his own uncle die. My grandmother told me that her father died in a tank in Poland when she was 5 years old.

I don’t really know what I want to be when I grow up but I think that something that will be connected to science. I'm sorry I didn’t answer you the last week but I had a really important test in trigonometry so I had to study. Hope to hear from you again. Eitan.

Hi. My name is Eitan Margulis. I'm 16 years old male. I live in Netanya, Israel. I live with my parents and with my brother who is older than me. I study biotechnology, biology, and chemistry and all the compulsory courses at school. My favorite subjects in school are chemistry and biotechnology laboratory. I read that you are interested in our elections, well we didn’t have elections yet, but we had elections for the local municipality, and in our city a woman called Miriam Fayerberg was elected for the third time with a majority of 81%. Our city is very small if we compare it to your cities. But the city of Netanya is very beautiful and special. Netanya is located on the coastal plain of Israel, so we have a nice beach. As I understood, we should be doing a project on the holocaust. As a Jew, it's a very sensitive subject for me, not only because 6,000,000 million people died, but because they were Jews. My grandmother and grandfather survived this terrible experience. I hope that this project will bring us the opportunity to know a little more about the Holocaust. I'm very curious to know you and to work with you! So I hope we will have a great project. Good Bye! Eitan.

Night-What do we know so far?

Elie Wiesel is a survival of the holocaust, and the writer of the book “Night”. From the exposition we can understand that Elie was 12 years old boy who was a religious Jew. Elie lived in 1941 in Sigit in Romania. The characters that were mentioned in the story are: Elie,Moshe the Beadel and Elie's father. We got a specific description of Moshe, he looks like a clown and someone that the kids like him, especially Jews. Another important thing is that he is involved in the Kabala. From the description of Elie's father we can understand that he is a very unemotional man that his friends are more important for him, even more than his family. Elie had a special interest in the Jewish religion, especially in the kabala and he found a teacher that would teach him the Kabala, even if his father didn’t allow him to do so. Elie had found Moshe, that would teach him the Kabala.