Crustaceans, are large number of arthropods, comprising almost 52,000 described species. The majority of them are aquatic living in either marine or fresh water environments, but a few groups have adapted to life on land, such as terrestrial crabs , terrestrial hermit crabs and wood lice. Crustaceans show both direct and indirect development. In most crustacea, development is accompanied by little or more metamorphosis and the various stages of development are known as larvae. Several larval forms are met within Crustacea and special terms are applied to each one of them.

It is the simplest, commonest and earliest larval form in crustacea. Nauplius is a microscopic, oval or pear shaped with an unsegmented body having a broad anterior head region, an intermediate trunk-region and a posterior bilobed anal region. It has 3 pair of unjointed appendages bearing swimming seate. The first pair is uniramous and become the antennules of the adult. Second is antennaryand third is mandibular called antennae and mandibles respectively in the adult. The head region bears a conspicuous sessile median eye. The mouths open anteriorly between the bases of antennary and mandibular feet. While the anus lies at the extremity of the caudal region. The alimentary canal is straight and made of foregut, midgut and hindgut. However mouth and alimentary canal are lacking in nauplius of Cirripedia. The larva is without a heart and a segmented ventral nerve cord.

It follows the nauplius, is a vaguely defined stage. It consists of an oval cephalothorax, an elongated trunk-region and an abdomen terminating in a caudal fork provided with setae. Dorsal shield of the head grows back to form carapace. In addition to the 3-origional appendages of nauplius, it also develops the rudiments of 4 pairs of appendages, which become the maxillulae the maxillae and the first 2 pairs of maxillipedes of the adult.

In some Cirripedia (Sacculina, Lepas), the nauplius passes into the cypris stage, in which the body and the appendages are enclosed within bivalved carapace with an adductor muscle to close it. Its modified antennules have of cement glands at their bases. It undergoes a remarkable series of metamorphoses to become the sessile adult form. In Ostracoda, the eggs typically hatch in the cypris form.

The metanauplius larva is succeeded by the protozoaea stage with 7 pairs of appendages and the beginning of segmentation. The carapace become enlarged and covers the dorsal surface anteriorly . The 7 pairs of appendages present in the metanauplius (up to 2nd maxillipede) become well-developed and capable of movements .The rudiments of paired lateral eye begin to appear near the median eye. The rudiments of the remaining posterior six thoracic segments are also marked off, but the abdomen is still unsegmented and without limbs. The protozoaea swims by antennae. In Penaeus hatch in the protozoaea.

Zoaea is the second important larvae of the Crustacea, the first being the nauplius. Protozoaea stage is succeeded by the zoaea stage. The zoaea is characterized with a distinct cephalothorax and abdomen, 8 pair of appendages and buds of 6 more, and resembles the adult Cyclops. The cephalothorax is immensely developed and covered by a helmet-like carapace, which is produced into two long spines, an anterior median rostral and a posterior median dorsal. Two lateral spines are usually also present. The paired lateral and stalked compound eyes become well formed and remaining 6 pair of thoracic appendages appears in the form of bud. The long abdomen is distinctly made of 6 segments, and terminates in a caudal furca, but still lacking in appendages. Zoaea swims by means of thoracic limbs.

The older zoaea or metazoaea has well formed third maxillipedes, which are biramous and swimming organs in Anomura, but uniramous and non-swimming in Brachyura. The 6 pairs of abdominal appendages also appear in the form of buds.

In Euphausiacea, one of the larval stages is termed calyptopsis .It is similar in all respects to a typical zoaea except that the paired 'eyes are not stalked but sessile.

In erichthus larva, a carapace covers the greater part of the body. Head is unsegmented, bearing median and paired eyes and all the 5 pairs of cephalic appendages. The thorax is made of segments, free from the carapace ,and bearing anterior 5 pairs of biramous swimming appendages .The broad abdomen is unsegmented and with a single pair of appendages. Such larvae are met with in Lysiosquilla.

The so-called alima larva of Squilla which hatch out from the egg directly, is a modified zoaea It is apeagic larva, having a glass-like transparency and occurring in large numbers in the plankton. It has a slender form, and a sort and broad carapace. All the head appendages are present. But only is 6-segmented, having 4 or 5 pairs of pleopods. The alima larva differs from the zoaea larva in the armature of the telson and a very large raptorial second maxillipedes.

In true crabs, the zoaea larva or metazoaea passes through successive moults into the post larval megalopa stage. It has a broad and crablike unsegmented cephalothorax. The carapace is produced anteriorly into a median spine. The eyes are large, stalked and compound. All the thoracic appendages are well formed of which the last 5 pairs are uniramous. The abdomen is also well formed, straight and bears biramous pleopods. 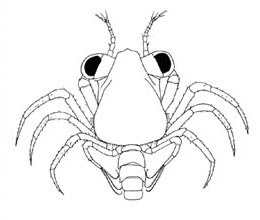 In hermit crabs ,the metazoaea leads to the glaucothoe stage. It corresponds to the megalopa stage of Bracchyura with a large symmetrical abdomen and a full complement of adult appendages.

In Penaeus, the zoaea , instead of converting into the megalopa stage, moults into the postlarval mysis larva with 13 pairs of appendages.all the thoracic appendages are biramous. Even the 5 pairs of posterior thoracic legs are biramous with flagellar exopodites which take up the locomotory function uptill now now fulfilled chiefly by the antennae. The abdomen develops similar to that of the adult form, with 5 pairs of biramous pleopods and a pair of uropods and telson .the mysis larva metamorphosis in to the adult prawn by the loss of the exopodites on the thoracic legs.

In the rock- lobster (palinurus), the newly hatched larva, called the phyllosoma or glass- crab, is a greatly modified mysis stage. It is a remarkable for its large size, extremely flattened and leaf- like delicate form and glassy transparency. A narrow constriction demarcates the head from thorax. A large oval carapace covers the head and the first two thoracic segments. The eyes are compound and borne by large stalks. Only anterior 6 pairs of thoracic appendages are present in the newly hatched larva. The first thoracic appendages or maxillipedes are rudimentary (palinurus) or absent (Scyllarus) and the second are uniramous, succeed by 4 pairs of very long and biramous legs with notatory exopodites Last two pairs of thoracic appendages are usually absent. Abdomen, though indistinctly segmented is very small and limbless. Phyllosoma undergoes several moults before reaching the adult form. 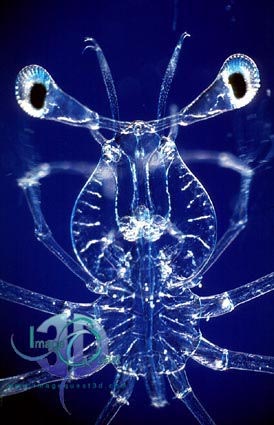