Copyright is the exclusive right granted to the author of an original work, including the right to authorise or ban the publication, distribution and adaptation of that work. Copyright only lasts for a certain time period after which the work is said to enter the public domain. Copyright applies to any expressible form of an idea or information that is substantive and discrete and fixed in a medium. Some jurisdictions also recognize “moral rights” of the creator of a work, such as the right to be credited for the work. Copyright is described under the umbrella term intellectual property along with patents and trademarks. 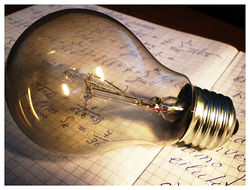 This bulb represents an idea

Copyleft is a play on the word copyright to describe the practice of using copyright law to remove restrictions on distributing copies and modified versions of a work for others and requiring that the same freedoms be preserved in modified versions. In other words, the copyleft allows users to reproduce, modify, or adapt the original creation in the way they want. This way new versions and publications are created. However, the copyleft obliges that any new creation based on the original must also be covered by the same copyleft licence.

There are many resources available online. However you need to be aware of the usage rights associated with such resources. Usage rights determine how you will use the resource(s) considering whether you can be able to customise and share the resource with your students.

Educational materials that are copylefted are referred to as Open Educational Resources (OERs).OERs comprises of:

Creative Commons licenses consist of four major condition modules: Attribution (BY), requiring attribution to the original author; Share Alike (SA), allowing derivative works under the same or a similar license (later or jurisdiction version); Non-Commercial (NC), requiring the work is not used for commercial purposes; and No Derivative Works (ND), allowing only the original work, without derivatives.[16] These modules are combined to currently form six major licenses of the Creative Commons: