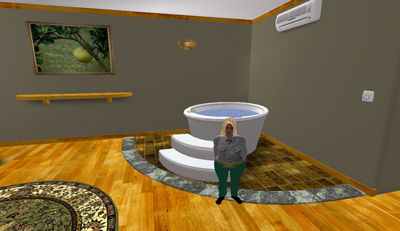 Many women enjoy the sensation of being immersed in water during labour and birth. Immersion in a deep bath can promote relaxation and the buoyancy that is attained, enables the labouring woman to easily change and maintain a variety of positions. Immersion in water during the first stage of labour has been shown to reduce pain and the use of epidural or spinal anesthesia/analgesia. Research has not demonstrated any differences in the duration of the first or second stages of labour, perineal trauma or in instrumental birth or cesarean section rates. There have been no reported differences in adverse outcomes when comparing labours with and without water immersion. For maximum benefit, it is important that the bath or pool is deep enough to fully immerse the woman's abdomen and chest and wide enough to allow her to easily squat, kneel and change positions. This pool has access from at least two sides so that the labouring woman can be assisted out of the pool with ease.