The basics of interviewing 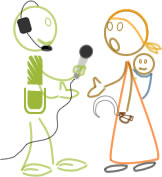 (Based on the CBC Radio Skills Manual)

The interview is so fundamental to everything we do that we must constantly make a study of it. People in positions of power are constantly learning how to take advantage of any weakness we show so they can lay down their own message tracks. Therefore, we must be constantly disciplined and vigilant.

Each interview should have a shape:

At the end of the interview, the listener feels that he/she has heard a story and more than likely will be able to repeat it.

The basic steps of interviewing

1. Before You Start an Interview

So think about the first question and formulate it very clearly before you start the interview. The importance of a good first question cannot be overstated. It should be clear, taut and to the point. This encourages a clear, to-the-point answer.

Interviewers act as surrogates for the listeners. They can elicit the best answers by relying on the traditional W-5 and How. Who, what, when, where, why and how are clean, clear, simple questions that get to the point.

Remember, you have to establish what the guest did and then “Why?” will complete the story. It’s somebody doing something for a reason.

Avoid self-answering questions. To the question, “You are 40 years old, aren’t you?” the only possible answers are “yes” or “no.” Ask instead: “How old are you?”

Avoid double-barreled questions. For example: “Why did you decide to become an undertaker and was it a good decision?” The guest is faced with a choice and will often avoid the more difficult question.

Be specific in your questioning. Amorphous questions, such as “Tell me about your farm” give the guest a license to say anything in any amount of time.

Avoid making statements instead of asking questions. If you say, “That seems to me to be the wrong thing to do,” you are giving an opinion, which could derail the whole interview.

Avoid making statements with an interrogative tone. For example: “Then what you are saying is that worms are best collected in glass jars?”

Use the word “you” or your guest’s name as much as possible. This underlines that you are talking to a real person. It makes it hard for the guest to generalize. It reminds him that he is talking on the radio as a human being, not as an institution.

Ask the guest to give examples. This will give the interview colour and imagery. It will also keep it from being too abstract and theoretical. We accept conclusions in the answers of our guests. For example, “It’s going to be a difficult dry season.” What does that mean? Will it be as difficult a dry season in the North than down South? We need clarification. The more specific answers are, the better your writing will be.

The success of an interview depends on several things:

All the work and research that goes into an interview before it goes to air is distilled in a few concise pages: a collection of notes, questions, and script.

Your notes should contain:

Your notes should be an interview road map. They give directions on how to get from beginning to end in the interview. They are support and comfort for the host because you’ve focused the story after research and identified any potential problems.