The Nauruan story of the First Coconut Tree

The origin of the Coconut Tree

There was no story in relation to the origin of plants and vegetables, but it was a common belief that the first seeds of all fruit trees were brought from heaven by Areow Eoning leaving all plants and shrubs unaccounted for. Some still believed that plants and shrubs simply grew from the soil after the lifting of the heaven and the origin of lands. However, the story relative to the first coconut tree was told as follows: Araimen II and Eagubaran (his wife) had many children; the name of the first was Agowenijong, the second was Eigomwij and the third was Abanoque and two twin girls whose names were Ijeijiaro and Ijeijibawo. One day the twins went to the beach to bathe and play. They were swimming on a piece of floatage which was given to them by their mother to keep them from drowning. They went further and further away from home and a man by the name of Abwijokow went, killed and buried them in the sand with the piece of floatage. After a while the mother went in search of them but she could not find them and she knew something had happened to them. She went and told Araimen II, her husband, that the children were missing. Araimen II called the tribe together and told them to go and search for the missing children. They all went away and did as they were told. A lot time after, one of Araimen's men by the name of Raeabanaq heard from one of Abwijokow's relatives that it was Abwijokow who killed the children and that he buried them in the sand at Anoboreidi in Meneng district. Raeabanaq asked, "Do you know the actual spot where they are buried?", and the reply was, "Yes! I was present at the time." Raeabanaq then asked to be shown the actual place where the children were buried and he was shown the exact spot. That night Raeabanaq dug up the floatage and the children and took them to Araimen II. On arrival Raeabanaq found Araimen sitting in his house. Araimen was surprised but he knew that Raeabanaq had some news for him so he invited him in and Raeabanaq, after sitting down proceeded to tell Araimen that it was Abwijokow who had killed his children. Araimen II then sent word to call back all his men to return and that he had received bad news about his children. Some returned but others had joined Abwijokow. Araimen sent a message to Abwijokow to inform him that within three days he, with his men will come to ight him because of what he had done to his children. After three days Araimen and his tribe went to war with Abwijokow and his tribe.

During the first tribal war, Eamwit against Deiboe, between Araimen II and Abwijokow, the former's oldest son was killed and buried according to the then prevailing custom.After three days Araimen II dreamt he saw his son Agowenijong who told him that a foreign tree will soon be growing from his grave and that Araimen should take very good care of 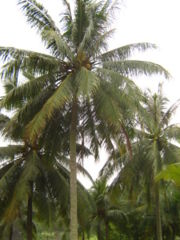 The uses of a coconut tree

In the past the trunk was mainly used as posts for houses and also to make fishing gear like small hooks etc. This is a lost art and I know of no known person who is carrying on this traditional art of making hooks etc. from the trunks of trees. Nowadays people are making furniture and adornments from the trunks. The last person I ever saw making fish hooks from tree trunks was my grandfather who died over twenty years ago. He did offer to teach his grandsons but they were too busy being iburuburs (white folks) and now they are regretting it. Sorry to say that I asked to be taught but it was not a "female thing".