Figure 1: used to demonstrate the use of charts and graphs with this experiment 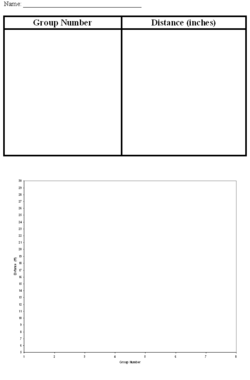 Student will create engines using plastic 2 liter soda bottles, baking soda, and lemon juice. They will measure the distance that the cars travel and compare the data with that of their peers. This will help them understand the law of conservation, force, and chemical reactions. Students will create a table and a graph to display the data collected from the experiment.

1. First take 2 squares of toilet paper, and put one teaspoons of baking soda on it. Fold the sides of the toilet paper around the baking soda to make a little packet. Do this four times so that you have four packets.

2. make sure your goggles and rubber gloves are on!.

3. Put the plastic funnel into the 2 liter bottle.

4. Pour 3 cups of lemon juice into the bottle or until the lemon juice reaches the height labeled on the bottle. Then have the students figure out how many cups they used to fill the bottle up to the label.

6. Make sure that the board is set up (as seen in the video) so that the rocket will have something to push off of when it takes off.

7. Draw a chalk line where the rocket will begin when it takes off.

8. Quickly drop the baking soda packet into the soda bottle, put the cork tightly into the opening of the bottle, shake the bottle, and set it on the ground at the chalk line.

9. Step away, and prepare to see the rocket explode!

10.Then draw a line where the rocket lands after it explodes. Next, have the students measure the distance between the two chalk lines and record on their handout. (You can have multiple groups of students do this experiment and compare the lengths that the bottle traveled)

11. After, be sure to pick up whatever mess is made on the sidewalk, rinse off the car, and the soda bottle.

7.12.c. Observe and describe the behavior of gases in containers (e.g., pumps, balloons);

This activity was so much fun! We arrived at the school to teach the lesson and realized that we forgot to bring the soda bottles but thanks to some quick thinking we able to use the lemon juice bottles instead. Group after group of students loved the activity and I think we got some serious science through to them. One of our classmates who had the students after us said they were talking all about those chemical reactions that happened inside the bottle! Unfortunately it was very windy the day of the activity and the place that we had to work with forced us to send out rockets up a slight incline so the rockets didn’t propel as far as they did in our test runs, but the students didn’t seem to care because the explosion that resulted from the chemical reaction was just as big and COOL. Totally successful activity, very easy to set up and a this students really understood the science behind it.