When a chemical reaction takes place, heat (positive or negative) is absorbed by the system. This heat can be determined• experimentally in a calorimeter at constant volume (q = ΔrU), or at constant pressure(q = ΔrU).

MEASUREMENT OF HEAT OF REACTION

When a chemical reaction takes place, there will be a change in the internal energy of the system. This change cannot be measuted directly, we can only measure the mechanical work performed on the surroundings and the heat received by the surroundings. If we arrange an experiment such that no work is carried out during the chemical reaction, we will have ΔrU = q. in the field of organic chemistry combustion reactions are of great interest. An organic compound and an excess of oxygen are placed in a closed container immersed in a water bath (a bomb calorimeter). The teaction is ignited by heating electrically a small piece of resistance wire. The temperature inc:rcase of the water upon the reaction is measured, and with the knowledge of the heat capacity of the calorimeter, the amount of heat evolved (-q) can be calculated. The volume is constant and no work bas been carried out.

Thus we can find ΔrU = Uprod - Ureac = q for the reaction. Since many chemical reactions take place at constant pressure (atmospheric pressure), we are also interested in measuring the heat evolved under these conditions, when pressure - volume work is the only work carried out. In this case we have ΔrH = q If we let a chemical reaction take place in a calorimeter open to the atmosphere, pressure - volume work is allowed to take place. From the measured temperature change of the water in the calorimeter and the known heat capacity we calculate the heat evolved (-q). Under these conditions we have ΔrH = Hprod - Hreac = q

For reactions in which only liquids and solids are involved, very little volume change occurs. If the reactions take place at the relatively low pressure of 1 atm, the pressure - volume work is very small, and we have ΔrH ≈ ΔrU. For reactions in which both condensed phases and gases are involved, ΔrH ≈ ΔrU + ΔnRT where Δnis the change in amounts of only the gas components. Direct measurement of heat of reaction can only be carried out for quantitative reactions (amounts of reactants left after reaction, and products formed by side reactions are insignificantly small). The procedure for measuring heats of reaction may be found in textbooks of experimentical physical chemistry.

The heat energy involved in a neutralisation reaction may be measured in a calorimeter at atmospheric pressure, and this information may be combined with the chemical equation for the reaction to give a thermochemical equation. For the neutralization of a strong acid by a strong base in aqueous solution we have:

The negative sign for the enthalpy shows that the system loses energy as it undergoes the change, energy is released, i.e., the reaction is exothermic. For an endotermic reaction the enthalpy of reaction has a positive sign. Since the essential step in the neutralization reaction is the formation of water from the ions, we may write the net equation:

The enthalpy of neutralizing a strong acid with a strong base is - 56 kJ mol-1.

In a thermochemical equation the quantities of materials involved are molar amounts of reactants and reaction products as prescribed by the equation. Thus in eq. (4.1) one mole of HCL reacting with one mole of NaOH produces one mole of NaCl and one mole of H2O with the enthalpy change - 56 kJ. The equation:

The enthalpy is a state function, thus the change in enthalpy, ΔH, depends on the final and initial state only, regardless of the pathway from the initial to the final state. This is illustrated in Fig 5.1

Fig5.1 The additivity of enthalpy change

We may produce one mole of liquid water from hydrogen gas and oxygen gas in two steps. In the first step water vapour is produced, and in the second step it is condensed to liquid water - or we may produce the liquid water directly. in both cases the total enthalpy change will be the same.

This principle of additivity is frequently called Hess' law of constant heat summation. Hess' law enables us to calculate enthalpy changes for reactions that are not easily carried out quantitatively in a calorimeter. The equation:

tells us that when one mole solid carbon in the form of graphite reacts with one mole oxygen gas to form one mole carbon dioxide gas. the enthalpy change is - 394 kJ. An amount of heat, + 394 kJ, is given off to the surroundings by the exothermic combustion reaction. The combustion of carbon to form carbon dioxide can be carried out quantitatively in a calorimeter. The same is true for the reaction:

In contrast the reaction of carbon to carbon monoxide:

is difficult ot carry out quantitatively. The carbon monoxide formed will be mixed with some carbon dioxide. Using the fact that enthalpy is a state function we have:

In Table 5.1 some standard enthalpies of formation are given.

The enthalpy of reaction is the sum of the enthalpies of formation, each multiplied by the stoichiometric eoemclent according to the chemical equation:

where "I are stoichiometric coefficients in the chemical equation. In the above equation VCH4 =-2, VCO2 = +1 and VH2O = +2

TEMPERATURE DEPENDENCE OF ENTHALPY OF REACTI0N

At constant pressure the enthalpy of an element or a compound changes with temperature according to the equation:

Here Δr CP° is the sum of the heat capacities, each multiplied by the stoichiometric coefficient according to the chemical equation:

The CP is additive in the same way as ΔH. Generally ΔrCP is a function of T. If, however the temperature interval 298 - T is reasonably small (up to a few hundred degrees), ΔrCP may be considered constant, and the integral becomes

In Table 5.2 are given some standard molar heat capacities. 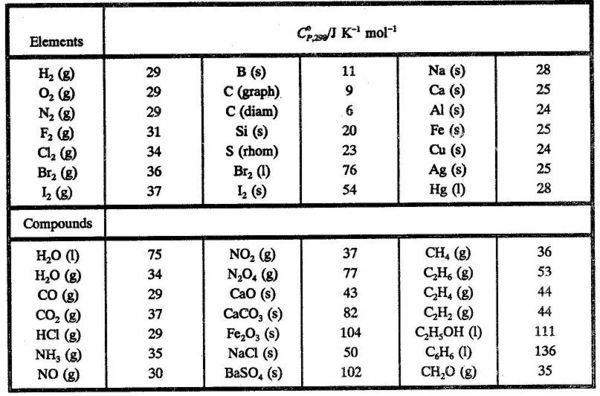 Using values from Table 5.2 we can find Δr C°P,298 for the reaction

Quite often Δr C°P has a very small numerical value as in the above example, and one may considerΔr H° as independent of temperature, particularly over small temperature ranges. The temperature dependence of the heat capacity of a substance is often given by an empirical equation of the form:

or, another empirical equation:

Often the change in enthalpy for a substance is more conveniently calculated from the mean beat capacity, Cp,mean which can be defined as:

where To is a reference temperature, usually 298 K. Values of Cp,mean for different temperatures T can be read from graphs, see Fig. 5.2.

The enthalpy change between the temperature T1 and T2 can be calculated from the mean heat capacities at the two temperatures: 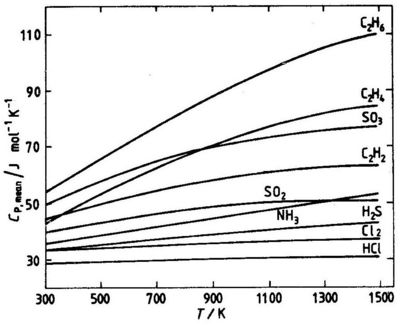 STANDARD ENTHALPIES OF FORMATION OF IONS IN DILUTE AQUEOUS SOLUTIQNS

For liquid (and solid) mixtures the enthalpy of formation depends on concentration. This will be treated in a later chapter in connection with partial molar quantities. We shall discuss already here, however, one type of solutions, namely the dilute electrolyte solutions in water. An aqueous solution is always electrically neutral, the number of positive charges is equal to the number of negative charges. An aqueous solution of an electrolyte will thus contain both positive and negative ions. It is not possible to study the one kind of ions separately. In tables, however, standard enthalpies of formation for single ions are found. In order to show the meaning of these enthalpies, we shall look at an example: When HCl is dissolved in water it is ionized to form H+(aq) and CI-(aq) ions. The enthalpy of formation of HCl (aq) in an infinitely dilute aqueous solution means the enthalpy of formation of H+ (aq) and cl- (aq) simultaneously:

It is not possible to find the contribution from the formation of each type of ion separately. As a convention one has chosen arbitrarily ΔfH°(H+,aq) in infinite dilution equal to zero. This corresponds to a value of - 167 kJ mol-1 for ΔfH°(Cl-,aq).

Temperature dependence of enthalpy of reaction: