Following is a list of the current cusines that will be displayed. These lists are locked, and can only be edited by My-Chef WiKi administrators. Please place suggestions for article that you would like added to the list under the Suggestions section above. 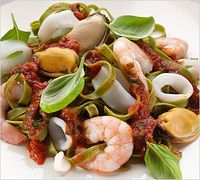 The Mid-Atlantic States[1] include New Jersey, Delaware, Washington DC, Maryland, Pennsylvania, Virginia, West Virginia. New York State is often considered a Mid-Atlantic state as well. Some of these states sit on the Eastern seaboard, while others are situated next to the great lakes. The seasons of the Mid-Atlantic States vary even within some of the states themselves. For example, the winter in New York City is vastly different from the winter in upper state New York in cities like Buffalo or Rochester New York which site on or near Lake Erie who has heavy snow fall every year. Additionally, states like Virginia has a much milder winter than Pennsylvania.

The Dutch were the first to colonize much of the Mid-Atlantic region, followed by the Swiss and Finns, who were attracted to the rich farmlands. The impact of the farms on the cooking from this region is immense. The farming influence runs the gamut from the international sophistication of major cities (New York and Philadelphia for example) to the lesser known specialties of Pennsylvania's farm country, including Amish and Shaker cooking.