Support vector machines (SVMs) are a set of related supervised learning methods that analyze data and recognize patterns, used for classification (machine learning)|classification and regression analysis. The original SVM algorithm was invented by Vladimir_Vapnik | Vladimir Vapnik and the current standard incarnation (soft margin) was proposed by Corinna Cortes and Vladimir_Vapnik | Vladimir Vapnik[1]. The standard SVM is a non-probabilistic binary classifier|binary linear classifier, i.e. it predicts, for each given input, which of two possible classes the input is a member of. Since an SVM is a classifier, then given a set of training examples, each marked as belonging to one of two categories, an SVM training algorithm builds a model that predicts whether a new example falls into one category or the other. Intuitively, an SVM model is a representation of the examples as points in space, mapped so that the examples of the separate categories are divided by a clear gap that is as wide as possible. New examples are then mapped into that same space and predicted to belong to a category based on which side of the gap they fall on.

More formally, a support vector machine constructs a hyperplane or set of hyperplanes in a high-dimensional space|high or infinite dimensional space, which can be used for classification, regression or other tasks. Intuitively, a good separation is achieved by the hyperplane that has the largest distance to the nearest training data points of any class (so-called functional margin), since in general the larger the margin the lower the generalization error of the classifier.

Whereas the original problem may be stated in a finite dimensional space, it often happens that in that space the sets to be discriminated are not linearly separable. For this reason it was proposed that the original finite dimensional space be mapped into a much higher dimensional space presumably making the separation easier in that space. SVM schemes use a mapping into a larger space so that cross products may be computed easily in terms of the variables in the original space making the computational load reasonable. The cross products in the larger space are defined in terms of a kernel function [math] K(x,y) [/math] which can be selected to suit the problem. The hyperplanes in the large space are defined as the set of points whose cross product with a vector in that space is constant. The vectors defining the hyperplanes can be chosen to be linear combinations with parameters [math] \alpha_i [/math] of images of feature vectors which occur in the data base. With this choice of a hyperplane the points x in the feature space which are mapped into the hyperplane are defined by the relation: [math] \sum_i{ \alpha_i K(x_i,x)} = constant [/math] Note that if [math] K(x,y)[/math] becomes small as [math]y[/math] grows further from [math]x[/math], each element in the sum measures the degree of closeness of the test point [math]x[/math] to the corresponding data base point [math]x_i[/math]. In this way the sum of kernels above can be used to measure the relative nearness of each test point to the data points originating in one or the other of the sets to be discriminated. Note the fact that the set of points [math]x[/math] mapped into any hyperplane can be quite convoluted as a result allowing much more complex discrimination between sets which are far from convex in the original space. 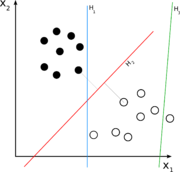 H3 (green) doesn't separate the 2 classes. H1 (blue) does, with a small margin and H2 (red) with the maximum margin.

Statistical classification|Classifying data is a common task in machine learning. Suppose some given data points each belong to one of two classes, and the goal is to decide which class a new data point will be in. In the case of support vector machines, a data point is viewed as a [math]p[/math]-dimensional vector (a list of [math]p[/math] numbers), and we want to know whether we can separate such points with a [math]p-1[/math]-dimensional hyperplane. This is called a linear classifier. There are many hyperplanes that might classify the data. One reasonable choice as the best hyperplane is the one that represents the largest separation, or margin, between the two classes. So we choose the hyperplane so that the distance from it to the nearest data point on each side is maximized. If such a hyperplane exists, it is known as the maximum-margin hyperplane and the linear classifier it defines is known as a maximum margin classifier.

We are given some training data [math]\mathcal{D}[/math], a set of n points of the form

where the ci is either 1 or -1, indicating the class to which the point [math]\mathbf{x}_i [/math] belongs. Each [math] \mathbf{x}_i [/math] is a [math]p[/math]-dimensional real number|real vector. We want to find the maximum-margin hyperplane that divides the points having [math]c_i=1[/math] from those having [math]c_i=-1[/math]. Any hyperplane can be written as the set of points [math]\mathbf{x}[/math] satisfying 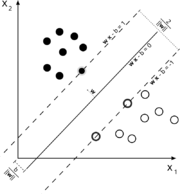 Maximum-margin hyperplane and margins for an SVM trained with samples from two classes. Samples on the margin are called the support vectors.

We want to choose the [math]{\mathbf{w}}[/math] and [math]b[/math] to maximize the margin, or distance between the parallel hyperplanes that are as far apart as possible while still separating the data. These hyperplanes can be described by the equations

Note that if the training data are linearly separable, we can select the two hyperplanes of the margin in a way that there are no points between them and then try to maximize their distance. By using geometry, we find the distance between these two hyperplanes is [math]\tfrac{2}{\|\mathbf{w}\|}[/math], so we want to minimize [math]\|\mathbf{w}\|[/math]. As we also have to prevent data points falling into the margin, we add the following constraint: for each [math]i[/math] either

This can be rewritten as:

We can put this together to get the optimization problem:

SVMs belong to a family of generalized linear classifiers. They can also be considered a special case of Tikhonov regularization. A special property is that they simultaneously minimize the empirical classification error and maximize the geometric margin; hence they are also known as maximum margin classifiers.

A comparison of the SVM to other classifiers has been made by Meyer, Leisch and Hornik.[2]

The original optimal hyperplane algorithm proposed by Vladimir Vapnik in 1963 was a linear classifier. However, in 1992, Bernhard Boser, Isabelle Guyon and Vapnik suggested a way to create non-linear classifiers by applying the kernel trick (originally proposed by Aizerman et al.[3] ) to maximum-margin hyperplanes.[4] The resulting algorithm is formally similar, except that every dot product is replaced by a non-linear kernel (integral operator)|kernel function. This allows the algorithm to fit the maximum-margin hyperplane in a transformed feature space. The transformation may be non-linear and the transformed space high dimensional; thus though the classifier is a hyperplane in the high-dimensional feature space, it may be non-linear in the original input space.

If the kernel used is a Gaussian radial basis function, the corresponding feature space is a Hilbert space of infinite dimension. Maximum margin classifiers are well regularization (mathematics)|regularized, so the infinite dimension does not spoil the results. Some common kernels include,

The effectiveness of SVM depends on the selection of kernel, kernel's parameters and soft margin parameter C.

Potential drawbacks of the SVM are the following two aspects:

The parameters of the maximum-margin hyperplane are derived by solving the optimization. There exist several specialized algorithms for quickly solving the QP problem that arises from SVMs, mostly reliant on heuristics for breaking the problem down into smaller, more-manageable chunks. A common method for solving the QP problem is Platt's Sequential Minimal Optimization (SMO) algorithm, which breaks the problem down into 2-dimensional sub-problems that may be solved analytically, eliminating the need for a numerical optimization algorithm.

Another approach is to use an interior point method that uses Newton-like iterations to find a solution of the Karush-Kuhn-Tucker conditions of the primal and dual problems.[8] Instead of solving a sequence of broken down problems, this approach directly solves the problem as a whole. To avoid solving a linear system involving the large kernel matrix, a low rank approximation to the matrix is often used to use the kernel trick.