A standard format, the backbone of radio for years – they are easy to produce and meet the audiences’ expectations. They can be good at getting:

One-on-one interviews in the field, with sound and demonstration

Also a standard format, and fairly easy to produce. They add a visual element to the information being transmitted. This engages the audience in a different way. They are still eavesdroppers, but now they can visualize the scene. Experts can conduct demonstrations, using clear and descriptive language and sound to place their information into a more readily digestible format. Field interviews using natural sounds can help give the audience a greater connection to the story being told, the emotions being expressed. An interview with the doctor at an HIV/AIDS clinic, with the sounds of the clinic all around, is more memorable than a studio-based interview. An interview with a patient at the clinic who is about to get a blood test will be more dramatic and emotionally richer than a studio based interview after the fact.

Hosts can also interview two or more persons at the same time. Or a host can interview one person and then another (and perhaps another). Hosts can also introduce a guest (and the topic at hand) by playing a recording or “clip” of the guest talking about the subject.

A good drama will always engage an audience because it is a good story. It allows producers to present real life issues and events while maintaining control over the information revealed and the message to be delivered. They can be quite time-intensive and require skilled writers and actors to carry them out.

Mini-dramas have 2-5 characters and are shorter and less time-intensive to produce than dramas.

One person tells the radio audience about the topic.

Short and “catchy” announcements or mini-dramas on a particular topic.

These are cheap and easy programs that allow the audience to be part of the program, to direct the conversation and to ask questions. They are efficient at engaging listeners. When an expert is included as a guest and to take questions, these formats can be useful ways of transmitting facts, as those facts will be based on real-life situations.

Vox pop is a good way to provide a sample of opinions from the street, giving more people a sense of “ownership” of the radio program. It validates peoples’ opinions, and yes, most people like to hear their voice on the radio. It is not a scientifically designed sampling tool. Vox pop, like all other types of programming, needs to have a narrative arc, and be approached as a story.

Vox pop is short for vox populi – Latin for voice of the people. It sounds simple enough, recording voices of passers-by, but there's more to vox popping than meets the ear:

Based on Gaber, I. (n.d.) Handbook for the URN Advanced Radio Journalism Course on Political Reporting. Uganda Radio Network

These are examples of vox pops:

A vox pop about the word "Scones"

A vox pop about Vox pops 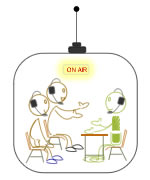 Panel discussions can bring the audience a variety of perspectives on a particular issue. Like other studio interviews they are quick and effective ways to cover a fair bit of ground. But, they can end up being a series of one-on-one interviews unless the panelists have a point of departure or disagreement with each other. An effective panel becomes as much a discussion among participants as it does an interview. The interviewer is more moderator than inquisitor. Lively conversation is more interesting to listen to and can convey more information effectively than a straight one-on-one factual interview.

A town hall discussion is just a great big panel, but done in the community, on location. The host is the moderator, often with some expert panelists to get the discussion going. But it is up to the audience on site to keep the program going with questions and comments from the floor. It is a highly visible way to provide ownership to the listening audience. Town hall meetings are usually recorded and edited for play back.

A soundscape is a short piece that uses the natural sounds of a location to tell a story. It is very visual, allowing the audience to imagine the scene and the action. It takes a little work to put a soundscape together, but an effective one can engage the audience’s imagination like few other programming options.

A diary is a narrator-less story in which the diarist talks directly to the audience. There is no sense of an intermediary or censor between the two. The diarist simply tells his or her story.

It requires an extensive interview in order to glean enough material to make a well-focused diary entry as most people are not sure how good their personal story is, or even what their personal story is. The difficulty with diaries is establishing the relationship between interviewer and diarist so that the resulting material is open and honest. It also requires considerable interviewing skill in order to remove questions without leaving gaps of understanding and transition in the final piece.

This is a fairly sophisticated format that requires a good story sense, writing and performance expertise, along with good recording and interviewing skills. It is time-intensive. But a small documentary of five or six minutes can engage the audience, take them on a journey, let them meet interesting people and provide useful information.

This is half interview, half documentary. The reporter is interviewed by the host. The questions and answers are normally written by the reporter so that she can tell a story to the host in a conversational way. During the course of the conversation, the reporter plays clips from interviews that illustrate points, convey emotion, takes the audience to a new place and develops a character. They are easier and quicker to create than a documentary, but they rely on good performances from both host and reporter.