Soil provides habitat to many organisms and micro organisms to survive. This microscopic life in soil is known as micro flora of soil. These micro organisms in soil are found to be in large numbers. Thus soil carries a vast variety of life ranging from submicroscopic organisms for example viruses to earthworms and large burrowing animals like ground squirrels and gophers. The large varieties of animals found in soil are referred to as macrofauna.

Soil consist of organic matter ,water,air and microbes.It vary according to the locality. Permeability is the physical property of soil it depends on texture structure and organic content.In clay soil pores are small but in sandy soil pores are large.Soil aggregates are the large bodies which consist of clay and slit particles are usually regulate activities of microflora.Moisture has a lot of influenze in biological growth.Soil contain inorganic salt which is necessary for the growth of microorganisms.Organic matter of the soil termed as humas ,is the products of decomposing activites of microflora which contain organic carbon and nitrogen for microbial development. Ref:Martin AlexanderIntroduction to soil microbiology'Second Edition'page no.9&10

These organisms which survive in soil also affect the soil in one or the other way. For instant some insects and other organisms like earthworm tends to improve the aeration and drainage through their feeding and burrowing activities. In general they creates more favorable soil environment which indirectly enhance microbial activities.

In most soils the mycelium of filamentous organisms (fungi and actinomycetes) is only present for relatively short periods so that aggregation produced by them tends to be ephemeral. In sandy soils, however, mycelium appears to be more persistent and hence is of greater significance. Since fungi are commonly associated with the early stages of decomposition of plant remains, it is suggested that they may also be important in situations where plant residues are regularly being added to the soil, e.g. grassland and forest.

This web page outlines the effect of soil properties on microbes.Bacteria

Nitrogen cycle is the major biochemical cycle found in atmosphere. The atmosphere contains approximately 70 to 80 percent of Nitrogen. Nitrogen is even required by the organisms, in order to produce amino acids. The nitrogen used by the organisms is in the fixed forms. Thus this free nitrogen is converted to the fixed form through the nitrogen cycle so that it could be used by the organisms. Following are the steps of the nitrogen cycle: 1) Atmospheric nitrogen is converted into ammonia by nitrogen fixing bacteria. 2) Nitrite and Nitrate bacteria uses this ammonia to produce nitrates and nitrites. 3) Plant uses this nitrates and nitrites to produce amino acids which are further used to make plant proteins. 4) Other organisms consume plants and thus use the amino acids of plants. 5) The nitrogen found in organisms is converted by the decomposers into ammonia and is returned to the soil. Little amount of the ammonia is returned back to the atmosphere by denitrification. 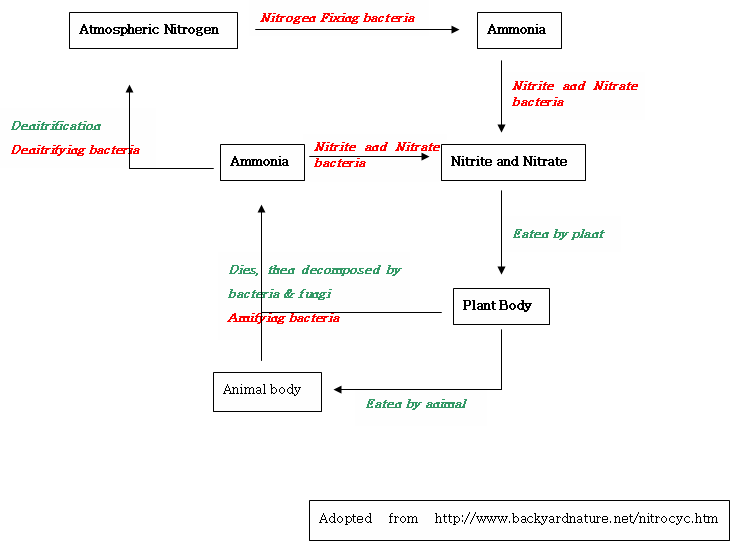 The following site gives added information about the Nitrogen cycle:[5]

The soil microorganisms play an important role in completing the cycle. They convert organic matter into body substances, liberate CO2 and water, increase and concentrate the nitrogen content, and bring down the ratio between carbon and nitrogen in soil.

Lignin is one of the most resistant organic substances for the microragnicisms to degrade.Many basidiomycetes have been found, but only small number of bacteria have been found to reduce lignin. The fungi, such as Fones, Ganoderma, Agaricus, etc utilize high lignin containing material. The enzymatic breakdown of lignin, with involving other fungi and bacteria, yields low molecular weight organic acids, carbon dioxide, methane, etc.
G. Rangaswami, D.G. Bagyaraj. 2004. Agricultural Microbiology. PHI Learning Pvt. Ltd. pp. 217-222.

Organic matter are the carbon compound formed from living organisms.There are three forms of organic matter found in the soil 1.dead form of organic meterial,contain dead plant parts,contribute 85% 2.living forms of plant like roots having microbes and soil animals 3.partially decayed organic matter called humus. There are certain steps for the decay of organic matter 1.Breakdown of components which are eaisly decompose example sugar,starch and protein ,they are decomposed by bacteria and fungi.Most of the microorganism found in soil have the enzyme which is needed for these compounds.Mites and small soil animals also help to degrade these components. 2.Breakdown of compounds that take several years to decompose such as cellulose (in soluble carbohydrate found in plants)and also lignins(complicated structure found in part of wood).Some bacteria and fungi decompose these compounds but they have no specific enzymes produced ,decompositin is takes place only the favourable condition like temp between 30-35 and soil must not be too alkaline ot too acidic 3.Phenol and compounds located in deep sea take ten or more years to breakdown. 4.Compounds take ten,hundred or thousand years to change.compounds called humus formed by integration of compounds from plant breakdown prouducts.[7]

[8][9]Organic matter is used as the source of food by various micro organisms, producing heat, carbon dioxide, humus and water vapor as a result of their growth and activities.

Fungi: It plays an important role in breakdown of dead plant material. Nearly 0.01 and 1 million propagules of fungi are found per gram of soil. The hyphae found in the fungi physically support the compost into small aggregates providing it with improved aeration and drainage.

Bacteria: Nearly more then a billion of micro organisms are found per gram of soil. These micro organisms through the excretion of organic compound lead to the stabilization of aggregates which binds adjacent soil particles and organic matter together.

Actinomycetes: These bacteria occur between 0.1 and10 million propagules per gram of soil. These bacteria are very much similar to the fungi. They form filaments or strands which are associated with the degradation of the more recalcitrant compounds. These bacteria can easily tolerate low moisture conditions than other bacteria. A chemical with earthy smell of compost is usually released by these kind of bacteria.

2. Holds water and nutrients: because of its cation exchange capacity it can easily hold onto water and many nutrients. This is because of the negatively charged molecules of the compost which attracts and holds on positively charged ions, such as magnesium, calcium and potassium.

Soil microbial communities are typically diverse. In addition, the roles of the various species are inextricably interconnected, so that, in experiments, direct and indirect treatment effects may be indistinguishable. This article considers mainly the bacteria and fungi.[10] And other material for microbial-degradation.[11]

These two websites describe the dynamics of microbial population in soil in terms of degradation of organic materials in the soil and the microbes involved.Organic Matter Breakdown and Soil Bacteria

This site gives a brief description on decomposition on fruit: http://en.wikipedia.org/wiki/Bacterial_decay This website talks about fungi and bacteria in soil:http://www.gardenscience.co.nz/soil/TGuides/soil-bugs.htm#soil

The substrate induced respiration: [14] The principles: This method goes with the fact that the micro organisms easily react with any available source of carbon found with an intensified respiration. Through gas chromatography or infrared gas analysis the quantity of carbon dioxide can be easily determined and can be applied to the empirical formula in relation with the biomass.

Advantages and limitations: It includes relatively small work and less time with good reproducibility. Micro organisms are not distinguished in any of the vegetative or active stage in this method. In this only the lowest concentration of glucose must be determines with the maximum breathing reaction. If the glucose is added in little amount then the biomass is underestimated whereas if too high amount is added the results is falsified.

The following article describes 4 different methods for measuring of biomass.