Everything in the world can be divided into two things:

Matter
anything that has mass and takes up space

All mass is conserved - it is neither created nor destroyed.
It may however, change forms

All of life processes are actually chemical reactions. The two most important of these are photosynthesis and respiration

Glucose is the simplest sugar and the building block for all higher carbohydrates.

This reaction requires light. Such a reaction is called a photochemical reaction.

Respiration is what provides energy for other process to occur.

All of nature is driven by energy. How this energy flows through the environment is important. The ultimate source of this energy is the SUN.

The flow of energy is governed by the two laws of thermodynamics.

First law says cooking and uncooking are exactly the same.

These questions lead to the second law of thermodynamics.

The measure of disorder is called the Entropy

The second law therefore says that the total entropy will always increase.

Since heat cannot be entirely converted to work, we say heat is lower quality than work. Whenever energy is converted from one form to another, some is lost as heat.

As we said before energy flows through the environment starting with energy from the sun. However, by the second law this energy gradually loses its quality. 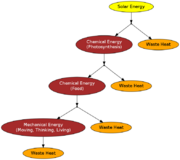 In food chains the efficiency of each level is about 5 - 20%. Carnivores have about 1% of the energy that plants capture.