Use the following quiz questions to check your understanding of density curves and normal distributions. Note that as soon as you have indicated your response, the question is scored and feedback is provided. As feedback is provided for each option, you may find it useful to try all of the responses (both correct and incorrect) to read the feedback, as a way to better understand the concept.

For which two variable combinations is a scatterplot the appropriate graphical display? 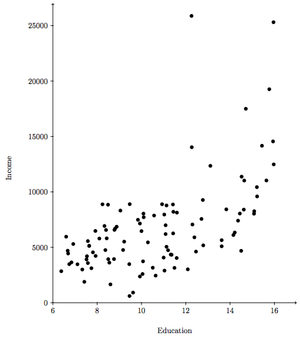 In a 1971 study of 102 Canadian occupations, researchers determined the average income (in dollars) and average education (in years) for incumbent candidates. The scatterplot at right shows the relationship of these two quantitative variables. Use the scatterplot to answer the questions.