The basics of Rock Climbing 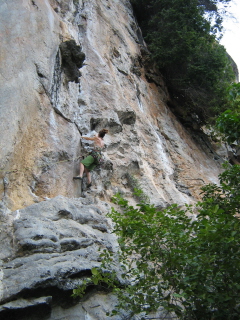 Climbing on limestone in Thailand

Rock climbing is a wholistic mind/body/soul sport that can be practised both in- and outdoors.

Indoors, specially designed climbing walls covered in moveable holds can be used by the climber for either bouldering or route climbing.

Outdoors, bouldering and route climbing can be done on established sport or traditional rock routes or the climber can choose to establish new routes on virgin rock. Outdoor climbing can be done on all forms of rock outcrops ranging from large boulders to mountain peaks and all types of rock such as limestone, sandstone, granite. These variations in shape, texture, length, gradient, location and exposure combine to produce an infinite variety of climbing difficulties and experiences.

Top rope climbing refers to route climbs where the rope runs through anchors at the top of the route. These anchors can be sport bolts or created with traditional equipment as discussed below. The climber ties into one end and the belayer belays on the other. While the climber ascends, the belayer takes in the slack rope thus, should the climber fall, she will only drop a small distance. 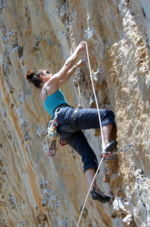 In lead climbing, the rope is not threaded through the top of the route. Rather the climber ties into one end of the rope and then carries the rope up with him and clips it into protection as he ascends.

Sport lead climbing
Sport lead climbing refers to climbing routes protected by fixed stainless steel bolts drilled into the rock at intervals. Some of the bolts used are:
While ascending the route, the climber clips a carabiner and then her rope into these bolts. 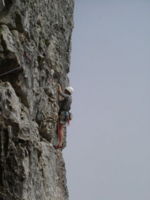 Falls in lead climbing
Thus in both sport and traditional lead climbing, should the climber fall, the belayer will lock the belay device and the rope will catch the climber at the closest point of protection or bolt to the fall. This means there is potential for far larger falls than in top rope climbing.

Key things to remember while lead climbing
Lead climbing can be very dangerous and the following points should be remembered:

There are many excellent climbing venues in New Zealand. You can find further information about these by searching the web for sites such as Climb New Zealand or by talking to the staff in your closest climbing and outdoors store.