1. Add labels to the diagram of the respiratory system of a dog below: 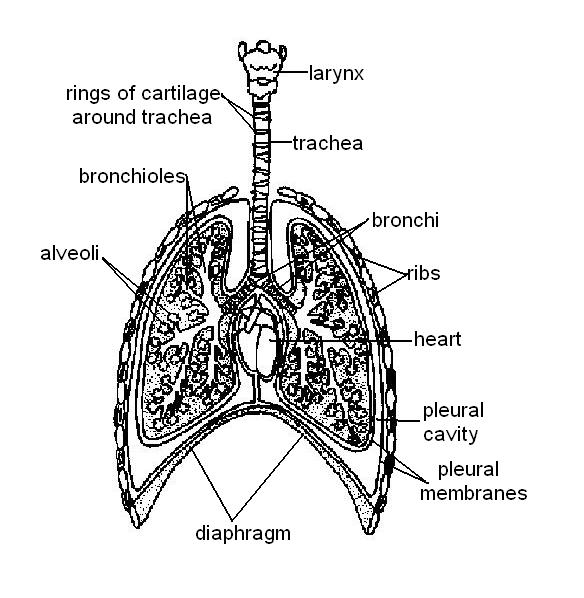 The oesophagus is part of the digestive system. The rest are parts of the respiratory system.

4. How are dust particles that enter the respiratory system in the air expelled? They become enmeshed in the mucus produced by cells lining the respiratory tract. They are then transported to the nose by the beating of the cilia that also line the trachea, bronchi and bronchioles.

a) Smallest respiratory passageways. C. Bronchioles
b) Separates the mouth from the nose. D. Palate
d) Windpipe. B. Trachea
e) Where gas exchange takes place. A. Alveoli
f) Stops food “going the wrong way” i.e. choking during swallowing. I. Epiglottis
g) Both air and food pass through this. G. Pharynx
h) The movement of air out of the lungs. H. Expiration
i) The main muscle involved in inspiration. F. Diaphragm
j) Membranes that cover the lungs and line the pleural cavity. E. Pleura
k) The volume of air inhaled or exhaled at each normal breath. J. Tidal volume

B. The muscles between the ribs contract to move the ribs up and out
D. The diaphragm contracts and flattens
A. The air pressure in the air tight pleural cavities decreases
E. The lungs expand to fill the space created
C. Air is drawn down the trachea into the lungs

Note: B and D occur together so the order can be BDAEC or DBAEC

a) The pericardium is the membrane surrounding the lungs. F. The membrane surrounding the lungs is the pleural membrane. The pericardium surrounds the heart.
b) The tidal volume describes the maximum amount of air that can be inhaled into the lungs. F. This is the vital capacity. The tidal volume is the volume of air that is inhaled or exhaled in one normal at rest breath.
c) Tidal volume can be measured with a peak flow meter F. A peak flow meter measures the force with which air can be blown out of the lungs.It does not measure volume. Tidal volume can be measured with any device that traps and then measures the volume of air expelled from the lungs during a normal "at rest" breath.
d) Inspiration takes up energy but expiration (during normal at rest breathing) is a passive process not normally requiring energy. T.
e) The diaphragm is made of smooth muscle. F. The diaphragm is made of skeletal muscle. The contraction of the diaphragm is under conscious control and skeletal muscle is the only muscle under conscious control.
f) The epiglottis closes off the larynx during swallowing. T
g) The rate of breathing is controlled by the pituitary gland. F. It is controlled by respiratory centres in the medulla oblongata (and the pons).
h) When an animal exercises the rate of breathing increases because the carbon dioxide in the blood increases. T.
i) Carbon dioxide dissolved in the blood makes the blood alkaline. F. Dissolved CO2 makes blood acidic.
j) Carbon dioxide in the blood is mainly carried in the blood plasma. T
k) Oxygen moves from the alveoli into the capillaries by the process of osmosis. F. Oxygen moves by diffusion.
l) Expired air contains about 16% oxygen. T.

8. Add the following labels to the diagram of lung alveoli below. 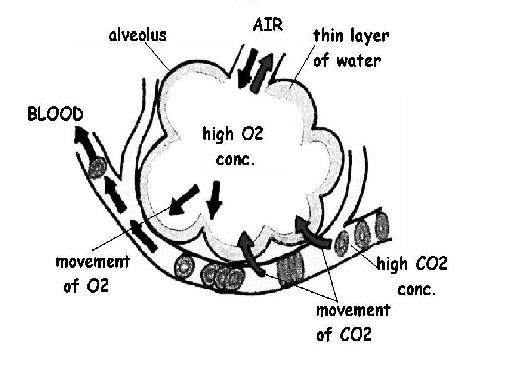 9. Which of the statements below gives the best definition of gas exchange? :d) exchanging oxygen for carbon dioxide in the lung alveoli.

The process of gas exchange is by (1)F. Diffusion. When substances pass in this manner, they move from areas of (2) G. Higher concentration to areas of their (3)H. Lower concentration. Thus oxygen continually passes from the (4)B. Air of alveoli and then from the (5)E. Capillary blood to tissue cells. Conversely carbon dioxide moves from the(6) J. Tissue cells to capillary blood and from (7)D. Capillary blood to alveolar air. From there it passes out of the body during expiration. As a result of such exchanges, arterial blood tends to be (8)C. Carbon dioxide -poor and oxygen –rich while venous blood is (9) I. Oxygen-poor and carbon dioxide – rich.

Return to WikiEducator Anatomy and Physiology of Animals