Oxidation is the loss of electrons

Reactant that is oxidaised is called the REDUCTANT

So the reductant reduces other reactant, while itself oxidised

Reduction is the gain of electrons

Reactant that is reduced is called the OXIDANT.

The oxidant oxidizes other reactant, while itself is reduced

Salt bridge must be present to complete the circuit; it links the half-cells Salt bridge allows the flow of ions so that the change in each half-cell remains balanced. 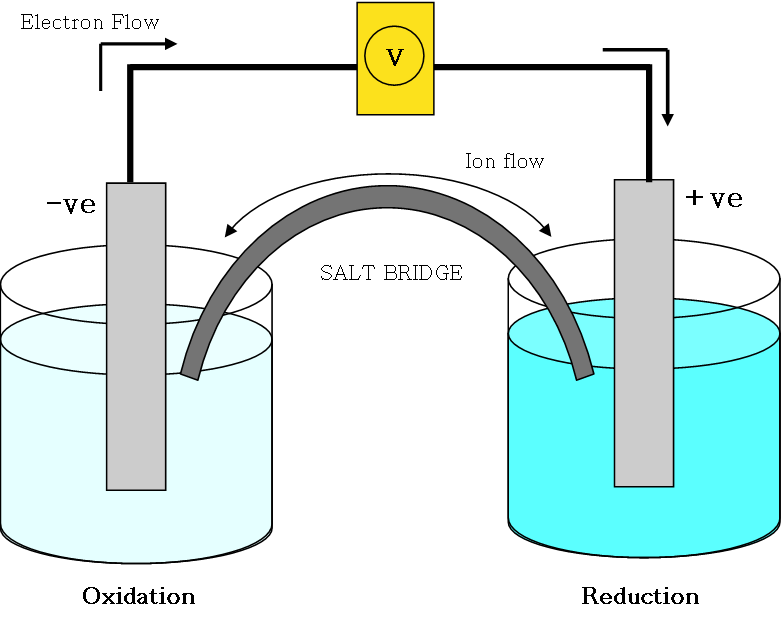 Electrons flow around the circuit, which is completed by the salt bridge.

Ion is transferred through the salt bridge from one to another.

Electrons are produced and transferred through an external circuit to the other part of the cell where a reduction reaction take place, accepting the electrons.

When two half-cells are connect to form an electrochemical cell.

Ecell is the difference between the standard electrode potentials of the two half-cells.

To make things easier, a reference half cell is used to measure all the others against it, so that a common reference point is made.

* Electrical potentials vary with temperature, so far all cells a temperature is defined to 298K (25°C) (K is another unit of temperature)
* All solutions have a concentration of 1.00 mol L-1.
* All gas pressure at 1 bar or 100kPa (kilopascals)

Potential of the standard hydrogen half cell is defined as 0.00V, a value chosen for convenience.

Instead of drawing the diagrams all the time to show the reaction between the two half cells, a cell diagram can be used instead.

The cell diagram consists mainly of two parts. The parts are oxidation and reduction.

NB: the state of each element/ion should be included in the cell diagram

A slash, / , is used to separate between different ions or elements with different states

Double slash, // , is used to separate between the two half cells. (separating between reduction and oxidation)

A comma, , ,can used to separate between the same states.

The order of the aq or g does not matter