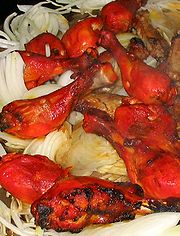 Pulse, bean and / or lentil preparations:

These are generally soaked overnight or for at least 8 hours and gently simmered on the embers of a tandoor (A clay oven of the shape of a horizontally sliced pot) along with ginger, garlic and a few other garam masala (whole spices like cardamom, cinnamon, mace, and bay leaf).

These are then combined with a tangy masala base which could include tomato or dried mango (aam choor powder) or even pomegranate seeds (anar dana). The character typical to the bean or whole lentil preparation is that the shape is retained intact, but the gentlest pressure would make it into a paste.

Dollops of cream and butter provide for the rich finishing touch. Garnishing is usually with shredded coriander leaves and juliennes of ginger.