Pointing devices or cursor control devices used to control the movement of the pointer to select items on a display screen.

The mouse is a point and click device. As you move the mouse across a surface, it senses this movement either mechanically or optically. This is translated into the movement of a pointer on the screen. Functions are represented as icons on the screen. When you click on these using a mouse button, the function is executed.

Touchpad
A touchpad is a device that senses pressure to guide the pointer on the computer screen. It is generally a small square area below the keyboard. As the user moves his/her finger across the touchpad, the pointer moves on the screen. Next to the pad are two buttons used for clicking in exactly the same way as those on a mouse. Touchpad is a popular alternate pointing device for laptops.

Trackball
A trackball acts as a type of overturned mouse. The ball is on the top side of the object. By rolling the ball you can move the pointer across the screen. Some keyboards have an in-built trackball especially in laptops. 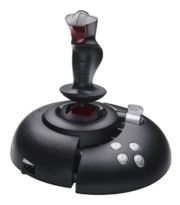 Joystick A joystick is a device that is familiar for use in games to move objects on the screen. However, it is also used to control the movements in computerised industrial machines such as lathes. It consists of a small vertical lever which can move in any direction. These movements are translated to the computer which in turn uses them to control the movements of machinery.