Also we have gathered knowledge that the name of a 1-dimensional array is itself a pointer to the first member of that array. So the above diagram can be more clearly represented as: 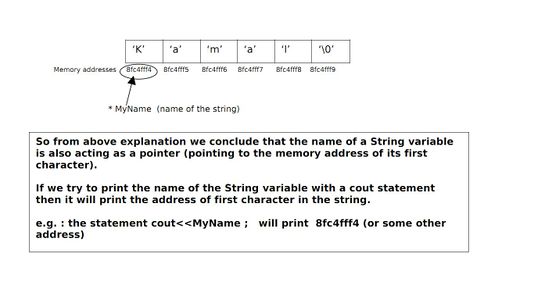 Q. Now keeping the above figure in mind fill in the following blanks :

Check this out with your local teacher.

holding the base address of the string.

By analyzing i) and ii) above we find that now there is no need to declare a string like char str[30]; (as we have done in class XI). This can be more dynamically declared as char *str (The benefit here is that we don’t have to fix the size). Only declaring a character pointer is sufficient to hold an entire string, since the end point of the string will be automatically marked by NULL (‘\0’) character, during run time. Hence:

or more dynamically as ,

Whatever string you assign to this it will accommodate, since the only need is to mark the beginning and end memory locations of the string.